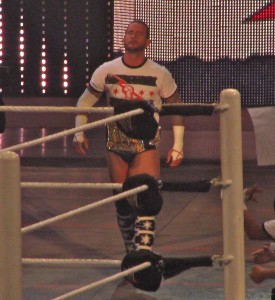 The latest iteration of Monday Night Raw got off to a blazing start. Okay, that’s just a bad pun. But really, a fire started from the Titan-tron and no one was able to get into the arena until 30 minutes before the show was to start.

That was probably the most heated thing on the show. With the move to three hours, it meant the show moved like molasses. What worked about last week’s show is that you simply wanted to see what was going to happen next so you stuck around. That’s basically what you want to happen. This week was the exact opposite. All of the segments seemed to be padded to stretch out the show. I found myself fast forwarding on my DVR more so last night than nearly any other Raw show ever. Maybe the last three hour Raw (except for Raw 1000) in fact.

Some of the positives:

– They were able to recap just about everything and get the stories they want to tell across. It becomes super repetitive, but if you think of Raw as a long commercial for the upcoming PPV, it’s not a bad thing, as long as people don’t start tuning out because of the repetition. So you have to be creative in that sense. They weren’t necessarily creative as like I said, there were so many fast forward moments on the show, but they have the time to tell the stories. Guys who can talk should get a lot more time to talk, but that can also work the other way for bad promos.

– While long wrestling matches aren’t my cup of tea for Raw since it’s not really what I want (my viewing habits change for PPV because that’s exactly what I want), if long matches on Raw are your cup of tea, you’re going to get them. Daniel Bryan vs. Sheamus was really good and would’ve probably gotten cut in half on a two hour Raw.

– Because of the extra hour, they can do show-long storylines such as CM Punk’s slow turn heel like they did tonight. With an extra four hours per month to tell your main event storyline, nothing will feel rushed. I don’t know if I necessarily liked Punk’s slow turn (which really didn’t happen yet), but it will allow them (and us) be more patient instead of the car-crash way they usually do things.

Some of the negatives:

– This isn’t the fault of the three hour time, but John Cena vs. CM Punk should be the main event and there should’ve been a tie to the Money In The Bank match from last year. They had that for Raw last week, but ruined it with a short match and interference. But we should be looking forward to a classic long CM Punk match again, and yet, they added Big Show to the main event which cuts my interest in half and probably more. Summerslam just got a bit worse, not better.

– Bad segments become longer too. I used to love AJ in her role as the psycho girl who was playing all the guys. As GM? Holy cow she was boring and bad. And because of the extra time, we got to see much more of her than necessary. She’s going to burn out quick and my prediction is that she’ll start getting booed not because of having heat, but because people are going to just get sick and tired of her.

– Bad matches get more time too. Because of the lack of depth, you’re going to get matches that aren’t entertaining. I never have to see John Cena vs. The Big Show again in my life. But of course it was the first main event on this new version of Raw.

– I think this will eventually be a positive, but it sure didn’t happen tonight. I expected to see more of the upper middle card guys get more time. Dolph was in a pretty good segment, but we really didn’t see him all that much. If they’re going to start breaking him out, we sure didn’t see it.