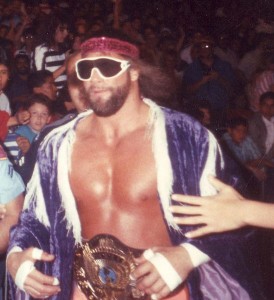 Perhaps the greatest all-round performer/wrestler in the 80s, Randy “Macho Man” Savage had it all. The look. The personality. The voice. The showmanship. The wrestling talent. But most of all, he WAS the Macho Man – in AND out of the ring.

Outside of Hulk Hogan, Randy Savage may be one of the most oft-imitated wrestling personality, with his trademark “Oh yeeeah” and “Dig it!” I’d be remiss not to mention his “Snap into a Slim Jim!” commercials. And other than Ric Flair, he often had the most amazing outfits on his way to the ring.

Growing up in a wrestling family, his father being WCW Hall of Famer Angelo Poffo, Savage was signed by the St. Louis Cardinals as a catcher straight out of high school. An injury later in the early 1970s and he focused primarily on a wrestling career, taking up the name Randy Savage.

A stalwart of the WWF in the 1980s, Savage was a 3-time champion, ending his career in the WWF in the early 90s having won the World Title twice. Of course, possibly his most famous match was him losing the Intercontinental Title to Ricky Steamboat at WrestleMania III, after he had held it for 14 months.

Of course you have to mention the woman behind the man, as wherever there was Savage, there was the lovely Miss Elizabeth. Usually his doe-eyed escort to the ring, Elizabeth did her best when she stood at ringside and looked concerned. One of the iconic images of the 80s was Savage holding Elizabeth on his shoulders.

Perhaps his most famous feud was against Hulk Hogan, with the breakup of the Mega Powers. Which, of course, was over a woman. Savage got his name by not only being a savage in the ring, but also being fiercely jealous over anybody who looked at Elizabeth a little too long.

After losing the World Title at WM5 to Hogan, Savage dumped Elizabeth and took up “Sensational” / “Scary” Sherri Martel. Savage went on to take up the moniker “Macho King” Randy Savage after beating then “King” Jim Duggan. The Macho King personality brought Savage back to how he was when he first started in the WWF, minus the random escorts.

At WrestleMania 7, Savage was pitted in a retirement match against The Ultimate Warrior, which also turned out to be one of his greatest matches. Savage made Warrior look like a million bucks in the loss, but it wasn’t until after the match that the real drama began. I remember being a young teen watching this match, and… wait… is that Elizabeth? Yes, that’s Miss Elizabeth in the crowd! And… oh no… damn, Savage lost. Now Sherri is in there, kicking him in the ribs and yelling at him, calling him a loser. Wait… Elizabeth is up… and she’s rushing the ring! She’s climbing into the ring… the crowd is on their feet… and she throws Sherri out! Yeah, I was a teen marking out over this. And when Savage discovers it was Liz who was there for him, and then the hug… damn, it just got a little dusty in here. Yeah, I was bawling like the women in the crowd. And that’s still one of my favourite wrestling moments of all time.

Although Savage went on to unretire and win the WWF title once more, his days with the WWF were essentially numbered. He moved onto WCW, eventually winning the World Title, but Savage had started to slow down. He retired in 2000, returning for a quick cup of tea in TNA in 2005, before retiring once more due to health concerns.

One of the highlights for me in 2010 was a video from the San Diego Comic Con for a new line of Mattel toys with a surprise appearance by Savage to the delight of those in the room. Savage had been keeping a low profile since his TNA appearance.

What was the defining match of Randy Savage’s career? One would say his match against Ricky Steamboat at WrestleMania III, but I’m going to offer you this:

This match should be required viewing for anybody looking to get into wrestling. Savage showed how you sell an injury throughout the match, barely being able to pull out a win in the end on one leg.

He is a man who could have gone to the WWE last year at 58, and won a crowd over, even though the majority may never had seen him wrestle, with only two words.

I’d been hoping to see him return to the WWE at some point, as the man deserved every accolade for what he did for wrestling. He’ll always be one of the greatest of all time, and a man whose wrestling legacy will never be forgotten.