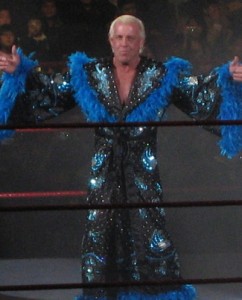 The other biggest star of the 1980s, Hulk Hogan, didn’t fare all that well in our list. I wrote about why Hogan may have fallen down the list, and my theory was that the last 10 years of his career have left a bitter taste in the mouths of wrestling fans. It’s not like Ric Flair has had a glorious last ten years, but the man is teflon. Not even this eye-brow raising story on Grantland hurt his standing.

To most huge 80s wrestling fans who started watching in the 80s, Flair is the greatest wrestler of all-time. He’s the kiss-stealing, wheeling-dealing, limousine-riding, jet-flying son-of-a-gun. He’s the man who changed for me what I always knew wrestling to be. I became a pretty big wrestling fan in the mid-80s, stemming from the time just before the first WrestleMania. I was a Hogan guy through and through. I believe that one of the main reasons I became such a big WWF fan is that their TV was so easy for me to find. They had a nationally syndicated TV show on Saturday morning right at the tail-end of the Saturday morning cartoon run (when that was a major deal). Finding the NWA was a bit harder, but as a budding wrestling fan, I eventually did find them.

I would see bits and pieces of the NWA and one of my best friends at the time would tell me about the Road Warriors, who were his favorite tag team. When I saw the Road Warriors, it was like looking at two super heroes in the ring. But if I trace back the first time I ever saw Ric Flair, it would’ve been on a syndicated Joe Pedicino/Gordon Solie show called “Pro Wrestling This Week”. They were discussing “The Nature Boy” against the “American Dream”. I didn’t know of Flair and Dusty Rhodes quite yet, but when they started talking about who is who, I just figured that the dream would’ve been Flair, since he was wearing his trademarked sequined robe and flanked by blonds. And when Rhodes came out shirtless and fat with a splotch on his belly, I just figured he was of nature. I was very confused when it turned out to be the reverse.

But soon-thereafter, I was hooked on Flair. Now, I would never claim to be a big Flair fan in the mid-to-late 80s, because I was such a Hogan guy and I had to be loyal to Hogan. And plus, Flair was a heel. I was too young to root for the heels at the time. But you couldn’t not keep your eyes on him, especially since one of the main stories the Apter mags would present was about who was better between Hogan and Flair. I would say Hogan was better, but silently believe that Flair was the better guy.

One of my early favorite Flair matches was a cage match against Ronnie Garvin at Starrcade 1987. I actually hated the fact that I saw that PPV because I was supposed to see the inaugural Survivor Series. But my cable company at the time was one of the few cable companies to stick to their guns and show Starrcade instead of the Survivor Series. That match with Garvin was full of Flair flops, chops, and ultimately, the Nature Boy prevailed like we all knew he should’ve.

While I could probably write 5,000 words on Flair and miss more on his career than I actually covered, I’m going to write about the two most distinct memories I have about the Nature Boy. The first is from 1989. And it has nothing to do with Ricky Steamboat. Well, that’s not true. It has little to do with Steamboat, but it has much more to do with Terry Funk. After Flair won his belt back from Steamboat at WrestleWar of 1989, Terry Funk jumped him after the Nature Boy wouldn’t accept his challenge, saying that he had to start from the bottom. I don’t know why this feud has stuck in my mind after all these years considering it wasn’t even that long, but I think it’s two fold. Terry Funk made things seem very realistic and insane. He also felt like the real deal. And secondly, I always loved Flair’s face turns. He may be one of the best heels of all time, but I also think he was an awesome babyface.

Flair would go on to beat Funk at the Great American Bash in 1989, which was such a great show. He and Sting would beat Funk and The Great Muta in a Thunderdome cage match at Halloween Havoc, which set up an I Quit match between Funk and Flair at the 9th Clash of the Champions. I wasn’t watching WCW PPVs until they hit video several months later, so the Clash match actually stands out most in my mind since it was the one I saw live. Flair and Funk had a great match concluding with Funk saying “Yes, I quit!” after yelling in the microphone that Flair was breaking his leg. The match ended with a handshake before all hell broke loose. My favorite part of the aftermath was that Sting comes down to save Flair in slacks, dress shoes, shirtless, and with face paint. Only Sting.

Here’s the ending of the match:

The second thing that stands out in my mind when I think about Ric Flair is the entire surroundings around him jumping to the WWF in the fall of 1991. If I was to gauge my wrestling fandom, I would say that in 1991 and 1992, I was a bigger wrestling fan than I’d ever been in my life. It got so bad that I was listening to “inside wrestling” radio shows on a cable channel that would stream radio shows while displaying a community schedule of events on a blue screen. The wrestling show probably just read news from the Observer, but I clearly remember knowing all the details of what was going on with Flair and NWA/WCW at the time and knowing he’d show up in WWF weeks before he did. The anticipation from him joining WWF made me a super nutty wrestling fan. While I loved every second of it, in retrospect, I wish they would’ve done it a bit differently. The goal should’ve been to make Flair vs. Hogan as hot as can be for WrestleMania, but they ran the program in house shows in late 1991 and many who wanted to see the match probably saw it.

I really wish they would’ve had him defend his “Real World Championship” against the likes of Roddy Piper, Bret Hart, Jake Roberts, and Randy Savage, continued to do the Undertaker vs. Hogan program and then have Flair win the Rumble to win the title with Hogan feeling like he had to win it for all of the WWF. As we know, it didn’t quite happen that way, but that year’s Royal Rumble is still one of my favorite wrestling matches of all time.

When it comes to defining era Flair matches, you can really close your eyes and pick and not be wrong. What about the matches in 1989 with Steamboat? His match at the first Clash with Sting that is still one of the most viewed matches of all time. His match with Savage at WrestleMania VIII was excellent. He had matches with Barry Windham in the late 80s that were great. There were other matches with Big Van Vader, Triple H, and heck, even some pretty darn good ones with Hogan too. But Royal Rumble 1992 is the match that’s stuck with me best. It was the ultimate wrestling “performance”. It was the performance that has defined the actual Royal Rumble match. Oh, and please, Be Fair To Flair.