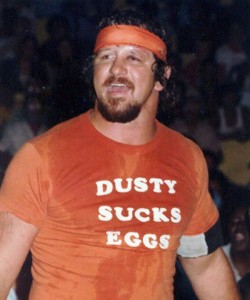 When the WrestleMania era started, Terry Funk was, by all measures, in the twilight of his career. Aged 41 and having done more in his career than 99% of wrestlers (including a short lived retirement in 1983), most men would have faded into the sunset, content with their undeniable status as a legend of the business. Terry Funk is not most men. He pressed on with his legendary career in All Japan Pro Wrestling and he surfaced back on American television in 1989 for the NWA/WCW. His role was simply to sit in on a panel of judges for the final Flair/Steamboat match of that year. Little did anyone know that on that night Funk would take part in an angle for the ages, as he attacked Flair post match and piledrove him through a table. It set off an epic feud between the two which brought Funk right back to the top of the national scene. Their I Quit match at Clash Of The Champions IX in Troy, New York was one of the best brawls ever to take place on a major US television show and saw Funk put over Flair in the selfless fashion that he did with so many others.

The 90s saw Funk’s career go in a whole new direction. Having always been one of the more believable brawlers in the world, the popularisation of “hardcore” wrestling in Japan and in the US gave Funk a whole new avenue to grow his popularity and feed his insanity. Bordering on 50 years of age, Funk was lighting himself on fire, jumping into C4 explosives and doing moonsaults off balconies. In doing so he helped two fledgling companies in FMW and ECW solidify themselves in the wrestling world with their own niche audience. In a gripping scene from the movie Beyond The Mat, Paul Heyman was shown rallying the ECW crew before their first PPV Barely Legal. With conviction in his voice, he told them all to thank Terry Funk because without him they wouldn’t be where they are. Funk’s role in ECW’s success is often underrated – he really was a key force in establishing what they became at their peak.

Now finally retired (well, we think), Funk can be looked at as a guy who, whilst a completely unique entity unto himself, was also a man who you could point to and say “that man is professional wrestling”. He embodied everything great about the business – the grittiness, the larger than life character, the know-how and talent inside the ring, and of course the incredible speaking ability. In a world where almost nobody is free from criticism, Terry Funk is probably one of only about five wrestlers who you will NEVER hear anyone say a bad word about. He truly is as respected and revered as they come.

The match that defines Terry Funk? You could pick several but I think this one goes that little bit extra in showing the kind of performer Terry was. From May 5th 1993, Funk vs. Atsushi Onita in the first ever exploding time bomb death match. This is every bit a gripping buddy movie as it is a pro wrestling match. The drama is off the charts, and the closing scenes are some of the coolest ever in wrestling.

Oh, and we would be remiss if we didn’t include a classic Terry Funk promo.