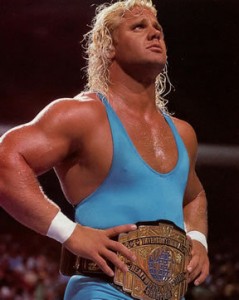 One of the greatest compliments you can say of any performer is that their work is timeless. This is especially the case in a trade as evolving, and at times fickle, as pro wrestling. Curt Hennig, at his best, was timeless – a great worker in an era of great workers.

Hennig understood the makings of a heel. He knew his job was to make whoever he was paired with look great, and he knew sometimes that meant making himself look silly. He knew when to sell, when to back off, when to cower – Hennig just got it. Seeing Mr. Perfect’s name on the card was a guarantee of quality.

While Perfect could bump like a boss and carry inferior opponents to matches few felt they were capable of, it was only when he wrestled guys like Shawn Michaels and Bret Hart that you truly saw the best of him. That was the type of level he was at and it was a level only a select few could match. While injury issues cost him ring time, he transitioned seamlessly between roles of wrestler, manager and commentator – his performance in each case; always perfect. During his entire stint with WWE, he could do no wrong.

Sadly, like with so many others, his talents were wasted in WCW. They had no idea what to do with a character like Hennig, and he became just another face in the unmotivated WCW locker-room of that time. Occasional glimpses of his brilliance still shone through – whether it be during the Horsemen/NWO feud, when matched with Bret Hart, or on his legendary Rap is Crap tour – but for the most part, it was a period of his career best forgotten.


Never were WCW’s failings with Hennig made more apparent than during his brief WWE return in 2002. At 43 years old and after a litany of injuries, Perfect showed he was still capable of hanging with some of the best in the business in a spirited Royal Rumble effort and on a handful of TV dates following it. The message was read loud and clear: Perfect still had plenty to offer in ring and could be an asset in other capacities for years to come.

Unfortunately, it didn’t last and he and the company again parted ways shortly after. Then his tragic passing, barely a year later, robbed us of a true great way too early. His influence however, is still seen every time you switch on a WWE show.

Ask anybody who grew up on 90’s wrestling for their archetypal heel worker and they will likely come up with two names: one is Rick Rude, the other is Mr. Perfect. It’s a shame Hennig never got the opportunity to carry the world strap in either of the big two promotions. His work during the period was deserving of that much at least, but in truth, he never really needed it anyway.

While his career path may not have allowed for as many peak years as some of the other guys on this list, the fact that he still found his way into the top ten, speaks volumes about the type of impact he had.

Defining Match Of The WrestleMania Era: Mr. Perfect vs. Bret Hart at SummerSlam 1991

Hart was always Hennig’s best opponent. Something about these two just brought the best out of one another. These guys had several genuine classic; any of which would make a worthy inclusion, but this is the most famous of the bunch – their Intercontinental Championship match from Summerslam 91.