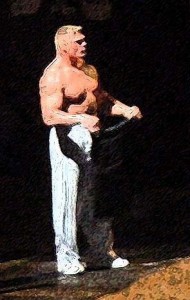 The weekend rumors were right. All weekend long, we heard rumors that Brock Lesnar had signed a one-year deal for limited dates with WWE. It was expected that he would either show up at WrestleMania or on Raw, and tonight, there he was, right in the middle of a WWE ring again.

After John Cena cut one of the most boring promos in the world in front of a Miami crowd that absolutely wanted nothing to do with him, Lesnar finally gave them something to cheer for. It’s likely that Cena’s tired promo was designed exactly to elicit the boos from the crowd, because he wasn’t going to win at any cost. The fans chanted for Daniel Bryan, Brock Lesnar (spoiling the surprise for the casual fans), and the Rock. After Cena congratulated the Rock and told him to come down to the ring, Brock Lesnar’s old WWE music played and out came Lesnar.

Lesnar didn’t look in either his insane WWE shape, or even his UFC shape. He was a little puffy, but still menacing. Michael Cole immediately called him a former WWE champion rather than a former UFC champion, which has to be by design as I’m not sure Vince McMahon wants to upset Dana White these days. But it came off lame because Brock Lesnar is far better known as the UFC’s biggest box office star ever than a former WWE champion.

Lesnar came out. Cena cheered as if he and Lesnar were best friends in storyline at some point. Lesnar stared a hole through Cena, then offered his hand and immediately put Cena in the F-5. It was the lightest and softest F-5 you’ve ever seen, but it worked very well with the live crowd. It was definitely a moment.

It means that by the looks of it, Brock Lesnar might work with John Cena at next year’s WrestleMania. I doubt it’s written in stone, but if you remember last year’s Raw that followed WrestleMania 27, they set up Rock vs. John Cena. If WWE wants to have a full one-year build again, it sure looks like John Cena vs. Brock Lesnar could be the WrestleMania 29 main event.

Lesnar seems to have a more natural storyline arc with The Undertaker, so I wouldn’t be surprised if he actually had more than one match this year and faced the Undertaker at WrestleMania 29 and Cena at maybe Survivor Series. You might remember the Ariel Helwani video, which seemed at the time like a set up to a wrestling angle.

It also sounds like Rock will be back at some point as he hinted at wanting to be WWE champion again. I do wonder if that means he’s interested in working with someone like Randy Orton or CM Punk. Punk seems to be angling with a match against Stone Cold Steve Austin. Who knows what happens in a year, but WWE definitely has some irons in the fire.

2 thoughts on “Brock Is Back”