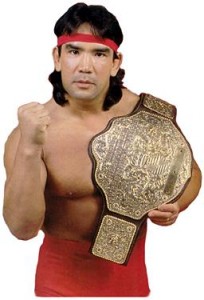 Ricky “The Dragon” Steamboat had the reverse career of many guys on our list who wrestled both in WCW/NWA and WWE. Guys like Chris Jericho, Chris Benoit, Mick Foley and Eddie Guerrero gained more notoriety after leaving WCW for WWE and became bigger stars. Or, guys like Curt Hennig and Ted DiBiase gained great fame in WWE and didn’t have great careers after leaving for WCW. Steamboat was able to have successful careers in both places.

In late 1986, they wrestled on Superstars of Wrestling and Savage brutalized Steamboat’s throat, injuring his larynx with the ring bell, as well as draping his neck over the guard rail and giving him the double ax handle. Vince McMahon said it looked like Steamboat was trying to “swallow his tongue”. Uh, right Vince. But it worked amazingly well. Savage acted like a lunatic heel, and Steamboat’s overselling made it seem like he was seriously injured.

This led up to what would become one of WrestleMania’s all-time greatest matches, and the best WrestleMania match of at least the first nine WrestleManias. We have it ranked at number 9. Steamboat would win Savage’s Intercontinental Title, but only hold it for a couple months. Supposedly, Steamboat had asked for some time off to be with his wife as she was soon to deliver his son. Rather than be given the time, he was stripped of the title, losing to The Honky Tonk Man. When he came back in late ’87, he wasn’t put in anything meaningful, but in 1988, was put into the WWF Championship tournament at WrestleMania IV. He squared off against Greg “The Hammer” Valentine in round one and a win would put him in a rematch with Savage. And if that match happened, maybe WrestleMania IV would’ve have been so boring. Instead, Valentine won the match and Steamboat was soon gone from the WWF.

In early 1989, he returned to the NWA and was immediately put in a feud with Ric Flair. From late February to May, he and Flair wrestled three classics with Steamboat winning the title at Chi-Town Rumble, retaining at the Clash Of Champions, and then losing it back to Flair at WrestleWar. Oddly, Steamboat would soon be gone and after spending some of 1990 in Japan, he was back in the WWF in a hokey costume and simply billed as The Dragon in the summer of 1991. He seemed to be doomed from the start maybe because of the way he left them in 1988, or maybe to show the fans that NWA’s champion couldn’t be more than just a mid-carder in WWF. But he was gone quickly and back in the NWA, which was transitioning into becoming WCW. His stay in WCW was strong wrestling-wise, and interestingly, he returned shortly after Flair left for WWF. He stayed in WCW for three years and had great tag team matches as a partner of Shane Douglas and Dustin Rhodes and had really good singles matches against Rick Rude and Steve Austin. In 1994, when Flair came back to the company, he had one more short feud with Flair which culminated in Flair retaining his title that he’d won from Big Van Vader.

Steamboat had been mostly away from wrestling until 2005, but worked for short periods of time in ROH and TNA before working exclusively with WWE as a road agent and sometimes trainer. He came out of retirement in 2009 for a handicap legends match vs. Chris Jericho at WrestleMania 25 and then had a fun singles match with him at Backlash.

As much as I’d like to say it was his match with Savage at WrestleMania III, his matches with Ric Flair were just a tad bit better. They were on a slightly smaller stage, but in the wrestling world, they’re known as some of the best matches of all time.