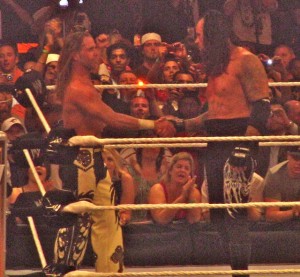 In the US, pro wrestling was down because WWE was down. TNA was more putrid than ever, which is a shame because they started 2010 with such high hopes. ROH and Dragon Gate USA continue to put out a product that, for the most part, their audiences like, but their audiences are small and hardcore. And based on what Alan has said, there’s some great stuff in some of the bigger independent organizations.

There’s always good stuff. Sometimes, you just have to dig. Alan, Duan, myself, and Stevie J from Angry Marks have listed our picks for our awards. Also, we have Big D making his return to the site for “One Night Only”, giving his thoughts as well. You can find D at Superfriends Universe.

Most Outstanding Wrestler Of The Year

Career year for Metropolis’ finest. He tore it up in NOAH, PWG, ROH, EVOLVE and wXw during the course of the year, having one great match after another. Shined in both singles and tags (as part of the Kings Of Wrestling). His matches with Akira Tozawa, the Briscoes, Martin Stone and Davey Richards were crazy good.

Another brilliant year for Cena. He delivered his best work when needed and remains the best reason to tune into WWE TV.

Fake Fired, real fired, who cares? This guy got 4-5 paychecks in the summer, was the most talked about guy on the net, and has had consistently great matches all over WWE AND the indies! He is the alpha dog.

It’s odd that in a year that he probably had less great matches than any year, I choose him for this award. But being that I watch mostly WWE these days, he was the best thing on TV all year. From his really fun match with Kaval in FCW to his match on NXT with Chris Jericho, to his really strong matches with Miz, Dolph Ziggler, and John Morrison, he was the most consistent performer on WWE television.

Pro Wrestling Show Of The Year

Jesus Christ, this show was ridiculous. A five star main event, a ****3/4 star semi main and a bunch of other great stuff on the undercard. When the worst match on a show is Danielson vs. Strong, that’s saying something.

Several quality matches and an epic main event. It’s the one thing WWE gets right every year.

If you get the chance to see WrestleMania live, do it. It was my second year in a row of being there live, and this time, I got to experience it with my kids. We had a blast. The show never hit a lull and the main event was one of the top two best matches I’ve seen live.

Match Of The Year

One of my favourite matches of all time. The culmination of a story that began when both men debuted 5 years ago. Amazing character work, storytelling and mindblowing action all in front of a white hot crowd of 10,000 people at their biggest show of the year.

It should have been impossible to follow last years effort, but some how they did it. Another classic and completely unique from the previous year’s effort.

Stevie J – Tie between Kevin Steen vs. El Generico (Final Battle), Shawn Michaels vs. The Undertaker (WrestleMania XXVI), and The Kings of Wrestling vs. The World’s Greatest Tag Team (Glory By Honor IX).

Benjamin/Haas vs. KOW came close but… this one was amazing because not only did they manage to have an unbelievably great match, they managed to follow-up one of the best ever and make it DIFFERENT. You can’t screw with these two.

I still say that their rematch was better than the one at WrestleMania XXV. I saw both live. In the crowd, I never felt that Michaels was going win the first one. They managed to get me to believe that he had a chance in the second. It was probably the most content I’ve been watching a wrestling match ever.

Came back from Mexico a new man in January. Given a huge opportunity by feuding with Hiroshi Tanahashi, and he seized it in a big big way. I see no slowing down next year. An IWGP Heavyweight Title charge is surely on tap.

I’m not sure exactly where Dolph’s position is in the WWE hierarchy, but I think we will find out in 2011. He’s developing his character and his ring work is constantly improving. He’s going to be great for WWE next year. It doesn’t matter whether it’s as a midcarder or main-eventer.

Big D – I predict bad things in 2011, including the buyrates and ratings still dropping and ROH fully going under.

I completely agree with Duan. My wish for Ziggler this year was for him to be able to wrestle a much more athletic style because he has the goods. Athletically, he’s up there with the best of the guys they have going. I loved watching him excel in matches with other guys who embody an athletic style like Kofi Kingston and Daniel Bryan. I see him in the main event picture sometime late next year and at least by 2012.

Moment Of The Year

Alan – The DDT roster get serious and toughen up HARASHIMA so he can save their title from Daisuke Sekimoto.

Big D – While HBK’s retirement is the most emotional, Nexus’ invasion had more people talking than anything and was the biggest “holy shit” moment of 2010.

GG – Even though we knew there was a good chance he’d show up, my favorite moment of the year was when Daniel Bryan came out as John Cena’s surprise man in the elimination tag match with Nexus.

Photo of Daniel Bryan shared via Wikipedia and is licensed under the Creative Commons Attribution 2.0 Generic license.