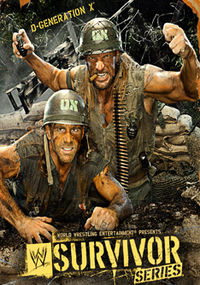 I remember being jazzed about the Survivor Series as a kid because after the turkey and gravy, there was something else to look forward to. You got to see some wrestling. Because the Survivor Series was on Thanksgiving and because they were tag team elimination matches, the show always had a special appeal. They weren’t always the best shows, but you always looked forward to it because what else were you going to do after eating turkey than fall asleep?

Well, that was a long time ago. But for some reason, this show still intrigues me. I always end up buying it no matter what. This year’s show has two stale matches on top, but there are still some interesting questions to be answered. Will Kofi Kingston push continue on this PPV? In the showcase of the youngsters, who survives in the match between Team Miz and Team Morrison? And how badly does Big Dave beat up poor Rey tonight? Well, we don’t have to wait much longer.

I will say this now just in case it happens, but if Shawn Michaels wins the title tonight, I think it’d be a nice capper, though they will never let him keep it longer than a month.

I guess I haven’t kept up with my ECW. Shelton is a good guy?

Matt Hardy and Evan Bourne did a double team elbow drop. Now that I think of it, that might be a pretty good tag team.

Dolph Ziggler is the first one out after being hit by Bourne’s “Air Bourne”. I guess the bloom is off the rose for him. Then Bourne walked into a big boot and double underhook DDT from McIntyre and he’s eliminated. We’re down to 4-4.

Sheamus in with Finlay which is the whitest match possible in WWE history. Sheamus big booted Finlay and he’s done.

The Miz and Hardy are in together and there’s just too much purple going on in the ring. And what’s up with Matt Hardy’s hairline?

Morrison hit the Starship Pain on Swagger for the pin. Now it’s 3-3 again.

After some help from Sheamus, The Miz hit Benjamin with the Skullcrushing Finale for the pin. Can’t we just call it the Stroke? It’s 3-2 in favor of Team Miz.

McIntyre hit the DDT on Hardy so it’s 3-1 Team Miz with Morrison left. This should be fun.

Wow. Sheamus was the one to get the pin on Morrison. He hit him with the Razor’s Edge to win it. I loved the booking with this one, but I would’ve had McIntyre pin Morrison just because they’re on the same brand and could feud.

The Miz, Drew McIntyre, and Sheamus are the sole survivors.

This crowd loves them so Batista so much that after hitting the 619 on Batista, Rey went to the top rope and did Eddie Guerrero’s little shimmy before missing the frog splash and the crowd booed. After Big Dave got his knees up on the frog splash attempt, Big Dave just killed the guy with Batista Bomb after Batista Bomb before the ref stopped it. I liked the booking here as well.

Big Dave gave him a spinebuster on a chair and they took Rey on a stretcher. This is the best usage of Batista in a long time.

Team Orton did a promo which I’m sure was simply there to show off the grizzlieness of CM Punk’s beard.

They played the hell out of Kofi’s leg drop on Orton at MSG.

Truth came out last so he could rap.

Mark Henry wins the award quickest elimination. He and Orton were in the ring together and Henry held a bear hug until he was hit with a RKO. Henry is done. Team Orton up 5-4.

Truth and Punk had a nice minute or so and then Truth ate a GTS and is now out. I wonder if this match is sped up because we’re already an hour and 15 minutes in and still have four matches left. Team Orton up 5-3.

Christian hit a sunset flip from the top on young DiBiase and Team Kofi is on the board. I guess DiBiase’s push is out the window. Would’ve been nice to see him do well here, especially if he’s turning on Orton, unless this is the impetus to turn Orton completely against him. 4-3 for Team Orton.

MVP hit the Yakuza kick on Regal and now it’s 3-3. After hitting the Balling elbow drop, MVP punched Orton and was hit with the Crossroads by Cody. 3-2 Team Orton.

Christian hit the Unprettier on Rhodes and now it’s Christian/Kofi vs Orton/Punk.

After hitting the Unprettier/Killswitch (I just like the first name better) on Orton with Punk breaking up the fall, Christian took the RKO and now it’s Kofi vs. Punk/Orton.

Orton tagged in Punk and Punk and Kofi went at it for a fun five minutes. Punk rolled up Kofi and his momentum carried him over and he pinned Punk with the roll-up. Then Orton came in looking for the sneaky RKO and was hit with the Trouble In Paradise for the win. The Kofi Express has continued. That’s how you push someone and get people behind him. Does this hurt Orton at all? Not one bit.

Kofi Kingston is the sole survivor.

4. Chris Jericho vs. The Big Show vs. The Undertaker

Well, this wasn’t one of the best three-ways you’ll ever see. It took them a little while, but Jericho went to hit Taker with the belt and hit Show instead. And then they started to break up each other’s pinfall attempts. Show was ready to give the Undertaker the choke slam and Taker pulled guard, grabbed his arm and put him in “Hell’s Gate” aka the gogoplata. Jericho was knocked out and couldn’t save Show because he blasted him with a big right hand just before.

By the way, the Piggie James stuff they did on Smackdown might’ve been the worst stuff I’ve seen on WWE TV this year. Just deplorable. Part of the reason why Mickie stands out is because she’s a curvy girl. Thankfully, no one in the media actually takes them seriously.

McCool turned a hurracanrana attempt by Kim into a styles clash. Kim is done. That was pretty sweet.

Poor Jillian has a terrible case of noassatall. Even though we saw the spot already, Eve hit a sunset flip off the top rope on Jillian for the pin. Then Beth hit the boob buster or whatever they call that move on Eve and she was done. Then poor Kelly fell to the same move. It’s now 3-2 McCool.

Mickie used a crucifix on Beth for the fall and it’s 2-2. Mickie hit the Thesz press on Alicia for the pin. It’s 2-1 Mickie and Melina.

Melina hit some sort of sunset flip on McCool, which makes that three sunset flip pins on this show. Then she and Mickie did a high five where they purposely missed the high five but then rotated through and slapped each other on the ass. I’m going to use that one with my female friends.

Triple H and Shawn Michaels came out together as DX, rather than to separate music.

HBK superkicked Triple H to start the show. They’re playing it up as if this is Michaels’ true colors. Shawn must’ve had a horse shoe in his boot because Triple H is nowhere to be seen.

Lots of back and forth. Triple H finally came back to life and put HBK through the table. HBK did a lot more in this match than he’s been doing lately and the match was better because of it. John Cena was hated. Cena had to take beatings from both Michaels and then HHH before HHH and Michaels finally faced off. It was weird because Cena was like the big goof in there with the savvy vets. Who was the champ again?

They did some fun stuff in the last five minutes. HBK superkicked HHH right onto a dead Cena and it was one of the more homoerotic covers you’ll ever see. Cena kicked out. Then a dead HHH was covered by a crawling Cena and HBK at the same time but kicked out at two.

HHH was set to pedigree Cena and was hit with the Sweet Chin Music and then Cena gave HBK the FU right on top of HHH and he pinned HHH.