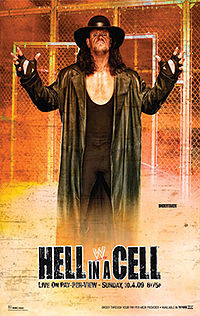 We’re a little delayed here, but oh well. This is another heavy gimmick show and by the end, I’ll probably be sick of the Hell In A Cell match, but oh well.

Looks like we’re opening up with Punk and Taker. This seems really odd to me, but oh well.

1. CM Punk vs. The Undertaker

I hate it when they call the Undertaker the best pure “striker” in wrestling. There’s nothing pure about not hitting guys.

The match was fun for what it was, though I’m not sure there was any reason for it to be in a cell. Punk was tossed up against the cage once or twice and that was about it. Punk bumped for Taker like a pro and either Taker is a great actor, or he’s hurting badly. But it didn’t stop him from doing everything he had to do in the match. Taker finally won it with the Tombstone in the middle of the ring, after Punk tried to hit him with a chair.

Does Taker get a long-ish run, or does Punk win it back on Smackdown?

This match is not in the cell.

I’ve always wanted them to let Ziggler show off some of his athleticism and skills on the mat since he was a really good college wrestler, and they did a little bit in the beginning which was fun.

I was a bit surprised at the finish, but thinking of how the story was told, it does make sense. Ziggler was “out-wrestling” Morrison and working his neck over. Morrison would counter some of his moves, but then Ziggler would get the upper hand again. Ziggler would hit some big moves, including the “Rocker Dropper”, and catching Morrison on the top rope getting ready for the “Starship Pain”. There were a few instances in which I really thought Ziggler was going to win it. They also had a ton of nearfalls.

Finally, Morrison was able to hit the knee while Ziggler was sitting which set up the “Starship Pain” and the win.

This is exactly the kind of match these guys needed to have. I wouldn’t say it was fantastic because there were instances in which their chemistry just seemed the slightest bit off. But it was definitely a good match.

The match went twice as long as necessary, but it wasn’t terrible. Alicia wasn’t really out of position at all and did one pretty sweet Northern Lights suplex. She missed her axe kick and Mickie hit the swinging DDT for the win.

4. Chris Jericho and The Big Show vs. Batista and Rey Mysterio

I was pretty bored with this match, but it got fun in the end. The Big Show and Rey worked some really good big man/little man spots at the end of the match. Rey was the star of the match, and he was just a tad bit slow on certain spots, but when he was in, the match was fun. When Big Dave was in the match, it was pretty bad.

After clearing the ring a few times, Rey was knocked out after hitting the 619 on the Big Show.

We’re back in the cell for this one.

It was a good match, though very methodical. It was worked at Orton’s speed, which these days is slow with tons of stalling. They had Orton kick out of the FU early, and also had him submit to the STF, though the ref was knocked out.

In the end, Orton tied Cena up in the ropes and put on a bad choke. Supposedly, Cena went out, and rather than go for the pin, Orton decided to wait for Cena to get on all fours and hit the kick of death. They had an up close angle of the kick and it looked weak. Very hokey finish that kind of ruined what was a pretty good match.

There was a spot where Orton dug the side of the chair into Cena’s neck that looked devastating, and that would’ve been a much more realistic finish. But they went hokey.

I guess these guys just trade the belt back and forth. Who else is ready to step in?

Jeez, I forgot this match was on the card.

These poor bastards. This crowd wasn’t going to bite for anything. Truth got a bit of offense in, but McIntyre hit the double underhook DDT, which looked terrible from the angle they showed, for the win. It looked like he simply dropped into his guard.

They teased dissension between Orton and Cody/DiBiase.

7. The Miz vs. Jack Swagger vs. Kofi Kingston

Another fun match and Kofi was able to keep the title. They had some really entertaining near falls and I think Kofi really blasted Swagger with one of his kicks. The second time he had to hit it, Swagger was dreading it.

Swagger hit the doctor bomb on Miz and then he had to take the kick again and Kofi pinned Miz.

This is the last match on the card, and it’s also in a cell.

From the perspective of how devastating a Hell In A Cell match can be, this did a good job of showing that. But it was such a long and laborious match to sit through. I guess it’s best that it was in the main event.

Legacy locked HHH out of the cell and just beat on HBK for what seemed like hours. Of course, Michaels’ sold the beating tremendously. HHH went to get bolt cutters and cut the chain that locked the cell. He didn’t bring the cutters in though.

DX was able to get DiBiase out of the cell and locked him out, and this time they brought the bolt cutters in. And they beat Cody’s ass like he stole something. HBK did the elbow drop from the top to Cody while he had a chair around his neck. And then HHH went to get the sledge hammer and he hit Cody with the hammer at the same time that Shawn hit the sweet chin music. If Cody is on TV tomorrow, anyone who saw this should be very upset.