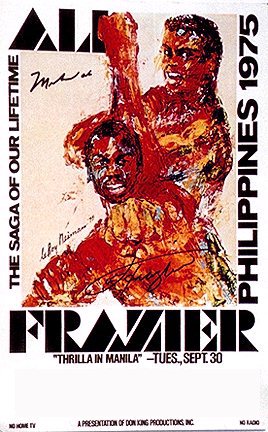 Duan and I had a back and forth e-mail conversation about the John Dower documentary on one of the most famous fights of all time. Muhammad Ali and Joe Frazier went to the Philippines to settle their grudge in their third and most savage battle. It was dubbed the “Thrilla in Manila”.

GG: Duan, after watching the documentary, Thrilla In Manilla, I was left with mixed feelings. On one hand, I felt bad for Joe Frazier, but also felt put off by the grudge he continually holds against Muhammad Ali. Did you have similar thoughts, and also, is that the feeling you think the director was looking for?

Duan: I don’t necessarily feel that the director set out to present Frazier in that way. I think he set out to compare two great warriors of the ring, and examine how history remembers them. In one corner you had Ali, the most celebrated athlete in not just boxing, but all of sport. And in the other you have Frazier, a man who went to war with him for 41 rounds, and who quite possibly is the second best heavyweight in history. Frazier never got the same recognition or acclaim though. I believe that’s what the movie was trying to emphasize. It was just about telling Frazierâ€™s side of the story.

I think the ideas you mentioned just went hand in hand with that story. You certainly feel for Frazier. He is still definitely haunted by the whole Ali rivalry, and by how he was unfairly labeled as the villain in it. It also seems like Frazier has never quite been given the full credit that his in ring accomplishments deserve. He was this amazingly talented and hard working fighter who gave us some of the greatest fights of all time, yet he is still struggling to make ends meet. There’s a lot there to sympathize with.

At the same time, I can understand why you were put off. He is consumed by his bitterness towards Ali. Some of the comments he made regarding Ali’s condition were very unsettling. I think as boxing fans we would like to see him forgive and forget, but that seems unlikely to ever happen at this stage.

Shortly after I first watched this film, I read that Frazier had to put his gym in Philadelphia up for sale. I found that heartbreaking and sad.

GG: It is very sad. I guess put off was maybe the wrong phrase. Maybe it was because I was fine with showing Joe’s point of view. Joe was a heroic fighter and he helped Muhammad Ali more than any fighter when Ali was shut out of boxing. He deserves his story. But while his story was being told, he painted himself as bitter and unlikable in certain instances. I just felt that while it was the reality of the situation, it took away from the story a bit. And I might be completely in the minority

What do you think were the strengths of the documentary?

Duan: I think there are two main strengths. Firstly, it shows a side of both characters that you are not used to seeing. It gives a really honest portrayal of Frazier’s character. Joe doesn’t pull any punches. He calls it as he sees it for better or for worse, and I think you have to respect that. It’s also interesting to see some of Ali’s flaws documented in film. You virtually never see that. I think it made for compelling viewing whether you agree with the depiction or not.

The other thing I think they did very well was highlight just how brutal that fight was. We are talking about one of the most famous fights of all time. Itâ€™s a fight I have seen many times and know inside out, yet it still made me take out the DVD and watch it all over again. I picked up on things I had never noticed before. I definitely think you have a new appreciation for the fight after watching it.

GG: Let’s talk about that fight. Some call it the greatest fight they’ve ever seen. People like my dad can’t watch it again because of how brutal it was. You obviously have watched a few times so you can stomach it. Where does it rank alongside some of the greatest fights you’ve ever seen?

Duan: It’s hard for me to compare it. I believe that in order to make that judgment, you really have to have watched the fight live. I wasn’t born until nearly ten years after it happened, so I can only ever view it out of its original context.

A huge part of what makes a great fight is watching the build up unfold – the hype, the anticipation, the buzz – then it all comes together on fight night. It’s not quite the same watching it back on tape years later. I think you need to have experienced that to really give a fair assessment of it. You should ask an old school boxing fan that question.

One thing I will say though is that I just wish we had a heavyweight even half as good as Ali or Frazier today. These two men were such a credit to the sport of boxing. Just look at the pace they were able to sustain right into the later rounds. It puts our current crop of lumbering heavyweights to shame. It’s such an awesome display of power, speed, movement, heart and work rate. You just don’t see that anymore.

GG: The movie mentioned that Ali compared this fight to death. Frazier nearly fought blind. Why do you think it was so important for each guy to give it that much and then more? What made it so important? Ego? Pride? Thrill of victory? Fear of losing?

Duan: Pride; I definitely think it was a matter of pride. Frazier handed Ali his first career loss, and i don’t believe Ali felt that he had truly avenged it in their second meeting. For Frazier, all the trash talking had made it very personal.

Garrett, I know that, like me, you are a huge fan of Muhammad Ali. What is your opinion on how he was portrayed in the film?

GG: I do love what I’ve seen of Ali. I think that if I was born 10 years prior, he’d have probably been my favorite athlete of all time. I’ve read Ghosts Of Manilla before so I kind of knew what to expect. I’d love to think that Ali’s darts were all promotion, but I think Ali definitely had a resentment towards Frazier because of how he was treated by his own country. It wasn’t even about Frazier necessarily. It would’ve been about any rival. It just so happens that Frazier was there. I don’t know the landscape of the 60s and only know what I know through movies and books. But it just seems that Ali used some of that resentment and the idea of how he was treated unfairly, towards Joe.

Duan: I guess a common criticism of the movie is that it doesn’t really give a balanced portrayal of the events surrounding the fight. A lot of people think that Ali is treated a little harshly, or that it is told with too much of a Frazier slant on it. As I said earlier, I viewed this as being Frazier’s version of events, and as such didn’t expect it to be completely unbiased. What is your opinion on this? Did you think the documentary was misleading?

GG: Not at all. I’m sure everything that they showed was truthful, but because Ali was such the showman trying to sell tickets, the only thing missing was his stance on why he was doing what he was doing. I’m sure some of it was based on what it took for him to mentally get ready for the fight, some of it was promotion, and some of it was some sort of weird anger he had toward Joe because of what Joe represented to him.

Last question from me and we’ll get out of here.

Do you think we’ll ever see this type of feud in boxing again? And if not, why?

Duan: I don’t think so, just simply because times have changed. This was at a time when the heavyweight championship was the most real thing in all of sport. Being the heavyweight champion of the world was the most prestigious honor you could ever wish for. Everyone knew and respected the man with the belt, and I just don’t think there’s anything that can compare to that in sport anymore. You need that for a rivalry to capture the publicâ€™s imagination the way they did. Also, athletes like Joe Frazier and Muhammad Ali only come along once.

I have one final question for you also. You touched on the idea of fight promotion vs. legitimate resentment earlier. Ali was always way a head of his time in terms of interviews and selling a fight. As an epilogue to the film, thereâ€™s an extract from a 2001 New York Times interview where Ali says that he was sorry for the things he said about Frazier and that he just got caught up in trying to promote the fight. Nowadays you often see guys pull all kinds of stunts to try hype up fights, but back then you really didnâ€™t see that so much. What is your opinion on this? How much of it do you think was Ali trying to sell the fight?

GG: Ali was definitely before his time in understanding promotion and I would imagine that some of that comes from him being a fan of pro wrestling when he was younger. There’s this weird thing about promoting a fight where some guys understand the wink, wink, nudge, nudge aspect, and other guys don’t. Ali took many shots at Frazier and I’m sure many of them hurt because of the time. Think about what the time and place meant to someone like Joe Frazier. To be called what Ali called him in those times was like a dagger in the heart, no matter if it was used to promote or not.

Could the fights have been promoted simply as the fight between two of the best ever? That’s pretty much what the first fight was billed at. But by the second and third go round, I’m sure they had to amp it up a bit.

I just wish Ali would’ve made that same statement he made to the New York Times, to Frazier himself. Would Frazier forgive him? Maybe not. Has Frazier turned the tables and said some really mean things about Ali? Sure. I just wish they could settle it outside the ring like they settled it inside the ring. They settled it like men.

4 thoughts on “A Conversation About “Thrilla In Manila””