At FGB, we like to collaborate on posts, but one of the issues in collaborating is that everyone’s opinion is so valid and smart, at times, it takes us a long time to get our thoughts together. And with newsworthy items, by the time we think of putting something together, it’s later that we’d like.

So, with some of the more newsworthy items, we’ll do “first reaction” or “quick thoughts” kind of posts. 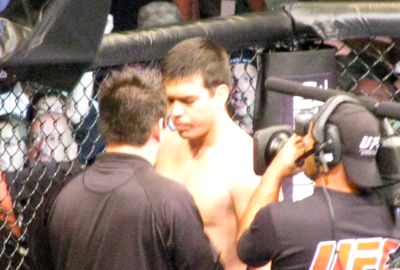 I decided to ask everyone what they thought about two up and coming UFC light heavyweight battles.

Cactus Jim: When I first heard Jackson versus Evans I was a little confused and thought maybe Rampage hadnâ€™t been offered the fight with Machida. After I heard that his preference was to fight Evans instead of fight for the title I immediately thought that would be like an American football player coming out of college and having the choice to play for Detroit or Pittsburgh and choosing Detroit. The question I have now is, â€œIs Jackson avoiding Machida for some reason?â€ Maybe health, timing, fear, etc. Or does he just want Evans so bad heâ€™d pass up a title spot to get the fight. I doubt thatâ€™s the case, because UFC just killed the Rashad/Rampage title fight by having them fight now.

Duan: Jackson vs. Evans is a solid match. It’s not a fight I particularly care about, but I’m just glad that they are not tying up the title in The Ultimate Fighter again.

Alan: Sucks that Rampage sits out until December. I think Rashad has underrated charisma so I have no problem with him being a coach. I have NO CLUE who wins the fight. It’s so 50/50 to me. I know Duan thinks Rashad was totally exposed by the Machida fight but in my opinion Rampage would have had the same thing done to him. Total toss up.

Duan (in response to Alan): I don’t think Rashad was exposed in the Machida fight. I just never thought he was a world title caliber fighter to begin with. He capitalized on a division in transition; that’s it. The guy is not an elite level fighter, and Machida is.

I said as soon as that match was announced that it wasn’t even going to be competitive, and sure enough he got outclassed.

In regards to Rampage having the same thing done to him, I agree. There’s good reason Jackson didn’t take that fight: It’s a horrible match up for him. He’s far to flat on his feet to deal with Lyoto’s movement. He’s very stationary. Look at the problems Forrest made for him just through having better positioning. I don’t think he would be able to close down Machida.

GG: I think it’s smart for Jackson to take the fight with Evans first, and not until December. If you read between the lines, he knows that he needs to sharpen up his skills in order to have a chance to fight someone as precise as Machida. But I’m not sure he beats Evans. But both guys need to step their games up because Machida just set a really high bar.

Cactus Jim: Machida and Shogun I just thought, â€œHe doesnâ€™t deserve a title shotâ€ and then â€œSucks to be Shogun.â€ Iâ€™m not jumping on any Machida bandwagon, but I have a feeling based on his past UFC performances that Machida is going to make Shogun look really bad.

Duan: Shogun has beat two spent fighters since being demolished by Forrest. He’s not deserving of a title shot, but there really isn’t all that many other options. Most of the big name light heavyweights are already committed to match ups.

Alan: Probably the only match they could make with Rampage and Griffin tied up. I like that Machida will be having his V1 so soon after winning the title (that needs to happen more), and really I don’t see him having any problem beating Shogun, who to me is cut from the same molld as Thiago Silva. I’m never going to be 100% confident with Machida until I see what kind of chin he has. Everyone has a chance of being clipped in a fight, EVERYONE. And until I see how he takes a shot, I can’t say that he’s unbeatable. If it turns out he has a granite chin, then oh boy, we could have THE GUY right here.

GG: I’m with Duan and Alan. He’s not really deserving, but there’s no one else. He did beat Chuck, and to a mainstream audience, that still means something.