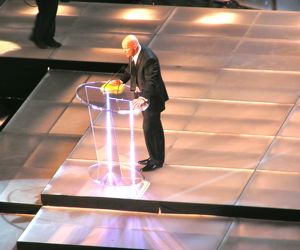 In two hours, I’ll update this post with a live report of Wrestlemania. I will be live from Reliant Stadium as long as I have cell phone access in the building.

Big D put up a preview of the big show yesterday.

I have a live report of the Hall of Fame ceremony from last night.

We also did an edition of FGB Radio which centered around the Hall of Fame from last night.

We’ll be back in a few hours.

This place is impressive and packed and we’re still technically early.

It looks like Miz and Morrison are in the dark match.

The HD screen is beautiful.

Miz and Morrison vs. The Colons
I’m already sad. Not only did this not get on TV, but Morrison had to lose to Primo’s back cracker. It picked up near the end, but I didn’t see the Bellas.

The opening to this show was one of the greatest video packages I’ve ever seen. It was based around the greatest Wrestlemania moments ever.

Nicole Scherzinger’s version of “America The Beautiful” wasn’t so beautiful. At least not compared to the renditions of the past.

The light show to start the show was awesome. If you ever go to a wrestling show, make sure it’s Wrestlemania. The presentation is impressive to say the least.

Money In The Bank V
Shelton just did a flip off one of the tall ladders that was death defying live.

Kofi Kingston should never not be in this match. His athleticism is incredible.

It was simply breath taking live with Kofi and Shelton as the MVP’s of the match. The live crowd booed Punk for ruining Christian’s shot at the briefcase and didn’t pop huge for winning.

Henry and Kane were used perfectly. Not sure if the match was as great on TV but it was a fantastic opener live.

I wonder if Edge now wins and Punk cashes it in tonight.

It’s not that I don’t like his music but I do thank Kid Rock for allowing me to use the restroom and not miss any wrestling.

Miss Wrestlemania Battle Royal
The battle royal was terrible live because they didn’t announce any of the girls beforehand so all you saw was blonde hair. The crowd popped for him though live.

Chris Jericho vs. The Legends
Mickey Rourke is sitting in the front row. I didn’t see Frank Shamrock.

Piper got the biggest pop of the three legends. Poor Jericho had to sell for Piper and Snuka. At least Dragon can kind of still go.

It was like Flair/Steamboat in 1989 except in slow motion.

The crowd is very much hoping Austin comes out. And there’s Frank Shamrock to his left.

Matt Hardy vs. Jeff Hardy
One Hardy is a bit more over with the crowd than the other. We won’t mention who.

Live, this was just another match until Jeff gave Matt the table sandwich. The ladder spot was great, but the twist of fate in the chair was a great finish. Those guys didn’t exactly have a great match, but they worked their ass off.

I thought they were going to do something classy for JBL leaving, but I’m not sure why I expected it. That was a complete waste.

The Undertaker vs. Shawn Michaels
The crowd definitely sees this as the main event. We need something great here. Ok, that was a great entrance live from HBK.

Chris wants me to add that he could feel the heat up here in the second deck from Taker’s entrance.

Taker is loved slightly more which makes sense since Shawnk has been more heelish of late.
Either the Undertaker screwed up or he goaded him into his guard. I couldn’t tell.

I think the crowd really wants this match to be great, but there’s something missing.

For some reason, the count out spot worked live.

They built to the superkick well though. The live crowd is eating it up.

This is definitely an Undertaker crowd. The match lost me after the first Tombstone as I thought that should’ve been the finish. But the crowd kept coming back. It was a pretty cool spectacle live.

John Cena vs. The Big Show vs. Edge

There’s 100 John Cena’s acting like cheerleaders with Cena running through his own “You can’t see me” tunnel.

The crowd has definitely died down from the last match. The only time they get excited is to boo Cena.

Ok, so the finish was great. Not sure if anything else was though. Cena is a strong man.

Seeing Austin in the ring again drinking beer made up for the short Hall of Fame speech. The pop is just as insane as it was when he was on top.

Randy Orton vs. Triple H
They really slowed the match down which is smart. They’re either building to Stef coming out and screwing it up or Priceless doing the same for Orton.

That might’ve been the flattest ending of all time.