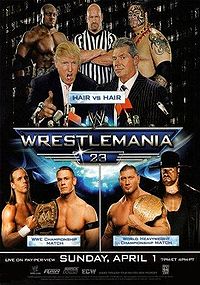 Donald Trump has been affiliated with wrestling in the past. He hosted Wrestlemania IV and V at his Trump Plaza in Atlantic City, New Jersey. They were two of the worst Wrestlemania’s ever, but that didn’t stop Vince McMahon from calling Trump’s name some 18 years later. And McMahon needed it.

Wrestlemania is what Vince McMahon and company build to every year. It’s their Super Bowl. It’s always the biggest PPV of the year, and the one in which they pull out all the stops. This year, the stops was Donald Trump. You might wonder why putting Donald Trump on a wrestling show, and one that he won’t even wrestle on, is important. The reason it’s important is because people wanted to pay to see who would get their hair cut between Vince and the Donald. Can you imagine a bald Donald Trump? Everyone wants to see that right? Even though anyone in their right mind would know that Trump would’ve never signed on to a match in which he’d lose his hair, it was built up so well, and it went on to be the main event in the biggest money making event in company history.

Donald Trump is still a big name. Even though his television show, The Apprentice was struggling mightily, he’s a well known public figure. And to get a well known public figure who isn’t a one hit wonder (like Kevin Federline) was a major coup for the WWE. It allowed them to enter the main stream media for a short while. The media picked up on Donald Trump being involved with wrestling and it sparked a little bit of a buzz. The wrestling fans are going to buy Wrestlemania. The goal is to get everyone else to do so.

Donald was put with Bobby Lashley. Vince aligned himself with the Samoan Bulldozer, Umaga. Lashley and Umaga would wrestle and if Lashley lost, Donald would get his head shaved. Of course, if Umaga lost, Vince would. When I heard about this, I smiled with glee thinking about how fun it would be for Vince McMahon to go crazy while getting his head shaved. But then it got even better. Who was going to referee this match? None other than that Texas Rattlesnake, Stone Cold Steve Austin. Austin’s new motto is, “Arrive, raise hell, leave” and I couldn’t wait to see him do so.

Even though that was the biggest money match on the card, the two championship matches were ones that made fans legitimately happy. The first one had been building up for a couple months. Dave Batista as WWE champion wasn’t working out. His matches were horrendous and people were losing faith in him. There was one grudge match that people wanted to see Batista in, and that was with the Undertaker. The Undertaker has taken sips from the fountain of youth of late. I’ve never been a big fan of the Undertaker, but he’d been nothing short of spectacular in early 2007. His Royal Rumble match with Shawn Michaels was great and I expected his match with Batista to be pretty good. How can Batista not be inspired to have a great match with someone who was busting his rear end to make the match special?

John Cena and Shawn Michaels had been on a crash course since January, at least in many of the fans’ eyes. When Triple H went down in January with another quadriceps tear, Shawn Michaels became the de facto guy to work with John Cena. We’d already seen Edge and John Cena, and while that was a wonderful feud, it had run it’s course. And Randy Orton was out giving someone a reverse chin lock somewhere. Michaels was the fans pick and thankfully, WWE relented. I don’t think they had him pegged originally because I heard his name being thrown out there for the match between Trump and McMahon. They gave us what we wanted.

There was also the Money In The Bank Ladder Match that has become a staple at Wrestlemania. In 2007, they expanded it to an 8-man match which I thought was a detriment to the actual match because it was too busy inside the ring. Having six men in the ring was quite enough, adding two made it like a mini battle royal. It did give two other guys a chance to be on the big show which means a payoff and a little limelight. The match was the worst of them (this was the third year in a row for the match) all, but it was still pretty good. It didn’t have the amazing chemistry of the first, or even the stellar booking of the second. But it did have a few crazy stunts including Jeff Hardy hitting a leg drop off of a high ladder onto Edge, forcing both men through a table. Ken Kennedy eventually would win the match, which was the opener. Being the opener probably hurt the match because it wasn’t given the time it needed to be spectacular.

The Great Khali and Kane were thrown into a last minute match together in which Khali won. What’s interesting about this feud wasn’t the match itself because that was horrible. But only five months later, these two guys would be top contenders for the Smackdown title after injuries would force the next two champions away from the brand. If you only knew at this time, maybe this match would’ve been more than just an afterthought. Here, it was an afterthought.

The late Chris Benoit surprisingly beat MVP with the head butt off the top rope in the third match on the card. In another afterthought, the ECW Originals defeated the New Breed after the soon to be leaving RVD won the match with a frog splash. And in a match I almost forgot about before checking the back of the DVD, Melina beat Ashley in a lumberjills match. It was a travesty that Mickie James’ Jeans wasn’t on the card in an actual match.

The Undertaker and Batista might’ve put on the best possible match that they could’ve put on. If you had to visualize what the perfect match between the Taker and Batista would look like, this would be it. It was the best match on the show in my opinion and both men put in the best effort of the night. The story that came out after the show was that both men were upset that they didn’t get to main event the show and wanted to make a statement that they should’ve been in the main event. The highlight of the match was the Undertaker taking a dive over the top rope like he was 20 years younger. The Taker took the belt with a tombstone piledriver to win the match.

Bobby Lashley and Umaga were completely overshadowed by having Donald Trump and Vince McMahon in their respective corners. They pulled out the shenanigans for this one. First, it had Stone Cold Steve Austin as a guest ref, which meant that Umaga was going to get hit with the stunner. And since Vince McMahon sees Bobby Lashley as a superstar, he wanted his best bumping big man out there and that is definitely Umaga. In no way did it ever seem like Lashley was going to lose. Donald Trump didn’t even seem to be worried that if Lashley lost, he’d have to get a haircut. But Vince was awesome. He has some of the greatest facial expressions in the history of facial expressions. And after Lashley pinned Umaga, it got even better. He tried to leave without getting his haircut until Lashley caught up to him. Then Lashley, Austin, and Trump all gave him the haircut of a lifetime. It was great entertainment.

And then the main event occurred. It was John Cena against Shawn Michaels in a match that was originally supposed to be John Cena vs. HHH until HHH got hurt. Cena received an interesting crowd reaction. During his entrance they booed him. During the match, it was half and half. And by the end of the match, I definitely heard some cheers. They had a main event style match with nearly 30 minutes to work with and lots of drama. Cena would finally win with the STFU submission hold and HBK would give his best babyface in peril look. I would rate the match at least four stars, but I thought the Undertaker vs. Batista match delivered more and in less time, but you can’t argue with the main event. It was a really good match and they’d meet again in an even better match on Raw some weeks down the line.

(I added some of the highlights of the Hall Of Fame ceremony that was held the night before.)

– Bobby Heenan introduced Nick Bockwinkel and when you have Heenan, you have entertainment.

– Bockwinkel was a bit stiff, but that’s his gimmick.

– The Wild Samoans were far better than you’d expect.

– RVD introduced the Original Sheik and he displayed far more charisma than he has in his entire WWE career.

– Don Muraco introduced Mr. Fuji and Fuji told stories of all the jokes he played on the other wrestlers. They also showed clips of Fuji Vice.

– Stone Cold Steve Austin told a story of how when he made his biggest career mistake, it was Jim Ross who helped him get back in touch with Vince McMahon.

– Ross was great and he genuinely seemed happy to be there.

– For some reason, William Shatner introduced Jerry Lawler off of one angle from many years ago rather than someone like Jimmy Hart or Lance Russell.

– Lawler tried to do stand up comedy and it fell flat for the most part.

– Wade Boggs told a story about how Curt Hennig saved his life in a hunting accident and how they were legit friends.

– Curt’s wife said that he was exactly what he said he was which was “absolutely perfect”.

– But the best of all was the American Dream Dusty Rhodes who delivered the best speech that I’ve heard in one of these ceremonies.

– Dustin was back and even did some Goldust.

– Cody Rhodes is going to be great one day. Ya, I said it.

– Dusty called out every guy you could think and allowed them to receive a standing ovation. HHH really seemed touched and I might’ve even seen a few tears underneath all that hair.

– Dusty asked Arn Anderson, Flair, and Harley Race to hold up four fingers and asked Flair if they could all be members of the Four Horsemen for a night.

– Krystal danced the sexiest dance imaginable with the Dream and he said that if his wife wasn’t there (who he called his reason for living), he would try and get some brown sugar.

The event was really good. Probably not as good as the previous three Wrestlemanias. But pretty close.

Photo by Caleb Jones and shared via Wikipedia.