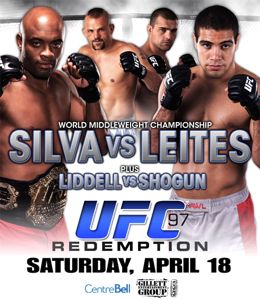 UFC 97 looks like a two fight show. The card leaves a lot to be desired. Other than the middleweight championship fight between Anderson Silva and Thales Leites, the rest of the main card is either heavyweights or light heavyweights. That can be good and bad, but it probably means that we won’t see a quick hitting and fast fight, unless one of the undercard fights make it on the main show. But even on the undercard, most of the fights are middleweight or higher.

You can see the entire card at Wikipedia’s UFC 97 page.

The FGB squad has predictions for the two fights. Stevie J from AngryMarks is also back to give us his thoughts.

This is the most interesting fight on the card. It’s essentially “Loser Leaves Town”, especially if it ends early and violently. If either one of these guys gets knocked out, it’s safe to say they aren’t coming back. I’m a bit torn here. I’m sick of betting on Chuck and having him disappoint me. I’m not as big a Chuck fan as GG, but it still bothers me to see him get beaten repeatedly. At the same time, Shogun Rua embarrassed himself in January against a man twice his age. We went into a bit more detail on FGB Radio so check that out too!

I want Chuck to win and hope it happens, but it may not. Still, I’m gonna get on him ONE LAST TIME.

I have said it before so I’m not going to dwell on it here, but I don’t believe Chuck Liddell should be fighting anymore. The signs are there that he should be calling it a day. Letâ€™s consider the last time Chuck landed that big one punch knockout. It was 6 fights and almost 3 years ago against Renato Sobral. That is a huge concern for a guy who really doesn’t have a plan B.

On the other hand we have Shogun Rua, who has been a colossal disappointment in his UFC tenure so far. His cardio has been abysmal, there’s no snap in his punches, and physically he looks weak. There isn’t really any reason for him to be a shot fighter. He is still young, and he hasn’t ever taken a huge amount of punishment. That begs the question; can he just not perform under UFC regulations?

Given both guys recent performance, I don’t believe a win here should be enough to put either back in the title picture. But my gut feeling is that Liddell will take this. I think that even a faded Iceman will have enough to see off the UFC version of Shogun Rua.

I’m probably not the right guy to be unbiased here since Chuck Liddell is my favorite fighter of all time. However, I still think he has the best chance to win. I don’t think it’s going to be a violent knockout loss for either guy and I don’t expect it to be a necessarily exciting fight. I think Chuck keeps his distance and boxes his way to a decision win.

Man, Leites came across as the nicest guy on the Countdown. It’s got me rooting for him. If he gets Silva down, anything’s possible. He just has to avoid the most lethal striking in MMA first. I REALLY want to stick my neck out and say Leites will pull it off, but I just can’t pick against Silva until he loses a fight.

I think Silva dictates that this fight stays on the feet where he has a decided advantage and that he out strikes Leites ending the fight in round one. I would really like to see this fight go to the ground though. I think it would be a more level playing field and that Leites would have a better chance at picking up a win. Leites has looked good in his last couple fights, but not good enough to beat Silva in my opinion.

Even hardcore fight fans have mocked this as the NO BUYS title fight of the year. I’ve heard that before about Anderson Silva and I still buy every UFC PPV he main events. Maybe I’m just a Silva fan, but then again, maybe I just see something special in him everyone else doesn’t. I’m convinced Silva is a man on a whole different level of MMA that it’s going to take his entire division years to catch – maybe a year, maybe two, but maybe he’ll retire undefeated long before anybody gets there.

Those who would argue he looked BAD against Patrick Cote have a valid point to a degree – it was a bad fight, but Cote was a bad opponent. He was so inferior to Silva in every aspect of the game that the fight was a joke to Silva, to the fans, to the announcers, to everyone. Maybe Silva should have made a point by putting Cote in the clinch and rocking him the way he did Rich Franklin (twice) but instead Silva entertained himself by making a cat ‘n mouse game out of the fight, and unfortunately before he could POUNCE Cote’s knee popped. That left a bad taste in everyone’s mouth – he didn’t fight to win and his opponent wasn’t even finished by KO or submission.

As main events go this was Hunter v. Orton bad – it was totally FLAT. Thankfully Thales Leites is no joke, and Anderson Silva can’t afford to play games with him. He’s on a five fight winning streak and has some seriously underrated submission ability, which both Ryan Jensen and Drew McFedries had to learn the hard way. If Silva goofs around, Leites shoots the legs for a takedown and chokes him out. Fight over, new champ. Since Silva has announced his intentions to either retire soon or transition to boxing, you’ve got to think he wants to go out being remembered as the pound-for-pound best that he is, not a guy who had a crappy main event win and then lost to a guy he should be able to beat if they’re both in their prime. That’s the key to this fight – the best Anderson Silva is better than the best Thales Leites. 9 times out of 10 Silva wins this fight – he’s quicker on his feet, his striking is bar none, his muay thai is incredible and you’d better not stick your neck out – he’s damn good at getting a submission choke – just ask Dan Henderson or Travis Lutter. Silva takes this one in the second round exactly that way – he rocks Leites with a muay thai knee and submits him when he goes to the ground.

This is a bit scary. We all have Liddell and Silva winning, which means if they don’t, we could have a curse of FGB.

We’ll be back on fight day Saturday with a live play by play of UFC 97.