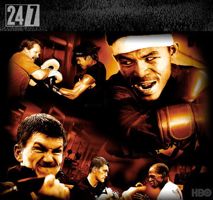 The show starts with Floyd Sr. throwing a party in his house. Ricky Hatton said that he found a new favorite drink, which he called “the kool-aid”.

Floyd says that Pac comes forward like an amateur.

Ricky says Floyd’s clothes are absolutely ridiculous. Floyd shows off his drawings which inspire some ooos and ahhhs. They are really impressive.

Floyd and Ricky talk about Pacquiao’s style and how he’s trained to throw punches in the same combination.

They talk about Pac’s religious background and Roach tells a story about being a kid in church and how a nun grabbed him and threw him down and then kicked him. He said he never went back.

Roach and Moorer have to kick out members of the Pac posse as the group reaches over fifty. But he keeps the cameras in because Roach wants Hatton to see Pac knocking guys out with body shots.

Hatton thinks there’s going to be a knockout because both guys don’t tip toe around each other. Mayweather says that Pac can be beat going to the body and they’re definitely going to do that.

Roger Mayweather says Ricky Hatton should win because of his size. Floyd says he doesn’t have any ill feelings toward his brother.

Floyd says he’s had a lung disease for about 8 years and it causes him to cough a lot. He says that it’s not the pain, but the agony that bothers him.

Roach says that Pac’s been working really hard this late in the training and he likes when he’s able to give him days off.

Ricky talks about how people thought he was wearing a thong in the first episode when he was just wearing boxer shorts pulled up his crack.

Manny’s mother comes to visit for her first trip to America.

They show Manny going to San Francisco to throw out the first pitch at the Giants game. They gave out Manny bobble heads. Manny threw it to Tim Lincecum and said he threw a ball, but not a strike.

Roach says Hatton has no strengths, Mayweather says Pac has no skills. I’m sure we’re going to find out soon.