With Floyd Mayweather Sr. and Freddie Roach as trainers, I imagine this 24/7 is going to be more about the trainers than ever.

The first shot is of Manny playing basketball. He’s the Filipino Mugsy Bogues.

They show Pacquiao’s destruction of Oscar De La Hoya and Roach says when they met in the center of the ring, he noticed marks on De La Hoya’s arms which lead him to believe that they had to rehydrate De La Hoya after the weigh in. He says he told Manny to jump on Oscar right away. 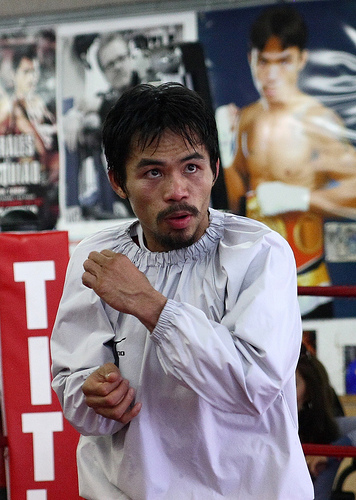 Pacquiao says that he told Oscar that he’s still his idol.

They also showed Hatton’s loss to Mayweather. He says it hurt because he really thought he was going to win.

After Manny beat Oscar, he had a daughter with his wife. They named her Queen Elizabeth Pacquiao. And the baby had 48 God parents. Wow! Queen Elizabeth?

Back at the gym, Michael Moorer is helping Roach work with Hatton. Michael Moorer is very fat these days. But considering how much those guys have to constantly stay in shape, is it really a surprise that they get fat after their career is over.

They talked about Hatton moving on from Billy Graham to Floyd Mayweather. Hatton says that Graham was slowing a bit and that made him slow. Graham says he hasn’t seen Hatton since the face to face when he was fired.

Floyd Sr. says that Billy Graham’s way was garbage and his is the best. He says he’s a technician in what he does.

Roach says bringing Michael Moorer in was a bit tough, mostly because Moorer isn’t afraid to speak up. He’s the Chief Assistant Trainer.

You’d wonder why Roach would change something that has worked for so long, but Roach says it’s because he needs a third set of eyes. Moorer says he run the gym when Roach needs to go out of town.

Roach says he’s had to close the gym for a few hours because there are so many fans that come in the gym to watch Manny. He said he thought it would help Manny, but Manny just decided to perform for them.

Hatton is in Las Vegas a month before the fight because Mayweather thinks it will be best for him.

Mayweather says Hatton was just a bulldozer using brute strength. He taught him defense and says he may have saved his life.

Ricky decided to pull down his trousers and show Floyd his thong. Floyd was appalled.

Ricky says he doesn’t think Floyd understood his sense of humor and just thought he was a dickhead. But he says he gets him now.

It was pretty much a nothing episode, but with Roach adding Moorer to his camp, it adds some intrigue. Also, I didn’t know about the re-hydrating that De La Hoya had to go through for the fight with Pac. I knew he was under weight and spent, but I didn’t know they had to re-hydrate him. Or maybe I did, but it sounds so crazy thinking about it again.

Photo of Manny Pacquiao by DRal10 and shared via creative commons