Wrestlemania was Vince McMahon’s baby. Technically Stephanie and Shane were his kids, but one could imagine that Vince took just as much care in his raising and handling of Wrestlemania as he did with his own children. And shame on those of you who just said that he might’ve shown more love and care for Wrestlemania. Wrestlemania was live in Madison Square Garden in 1985, and Wrestlemania 10 was also at the Garden in 1995. It didn’t take a genius to figure that Wrestlemania XX would call the Garden home. The line-up was stacked for Mania XX and Vince started promoting the event at Mania XIX. It had an entire year of promotion and it delivered.

Well, the answer to the first three questions was yes, but sadly, at least from this old Hulkamaniac’s point of view, the fourth was a big fat no. The PPV was set up with making Chris Benoit the superstar wrestling fans have always wanted him to be as well as establishing Eddy Guerrero as a fighting champion. And it did those things very well in my opinion.

The problem with having a PPV of this magnitude is that if it is a solid event, but doesn’t quite match the hype, it almost feels like a failure. And while that wasn’t the case here, if it wasn’t for the two championship bouts, it might’ve been looked at as a failure. The reason for that is because there were two huge matches that were advertised just as hard and maybe even harder than the two championship matches, and those failed miserably.

It was predictable that these two matches would fail to excite, but for two different reasons. The WWE had been teasing Brock Lesnar vs. Bill Goldberg for some time. When Brock came into the WWE the day after Wrestlemania 18, the crowd immediately chanted “Goldberg” at him. And when Goldberg came to WWE the day after Wrestlemania XIX, the two of them eventually hooking up was inevitable. But they didn’t really interact until the Royal Rumble as Brock Lesnar helped eliminate Goldberg from the Royal Rumble match, thus ending his shot at a world title match. At the next PPV in San Francisco, Goldberg helped Eddie Guerrero defeat Brock Lesnar to become the WWE Heavyweight Champion. The two were announced to lock horns at Wrestlemania. The interest was there and it was also one of two interpromotional matches. Goldberg was on Raw and Lesnar was on Smackdown. At Mania XX, they would meet in the ring.

It was known that there was a good chance this would be Goldberg’s last match. He had a one year deal that was expiring at Wrestlemania and he didn’t have a very good year. But what was unexpected was that Lesnar was actually talking about retiring after Mania. The top two wrestling websites reported that he was unhappy with the travel and all the damage it was doing to his body and that he was going to try his hand at the NFL. And when the two of them finally got in the ring, the fans let them both have it.

This wouldn’t have been a good match anyway, but with the fans already crapping on it, the two guys in the ring weren’t going to do much. So Stone Cold Steve Austin had to steal the show. He was the guest referee and ended up giving Stone Cold Stunners to both guys after the match. Vince wanted the one guy who was still going to be with the company to be the one standing at the end. And in an ironic twist, Austin would be gone soon thereafter as well. 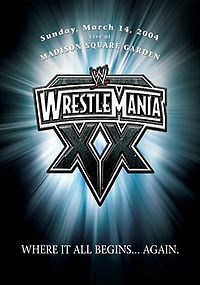 The other angle that was promoted hard was the return of the Undertaker. It was supposed to be special because he was going to return to his old “Dead Man” character. He hadn’t played this character since the late 90’s. The story goes that Vince McMahon and Kane buried the Undertaker alive, thus killing him. (And the WWE likes to say they don’t do murder angles.) Then there were mumblings going on about the Taker coming back and then they teased us on Raw playing the “gong” while Kane was in the ring. If you’ve ever seen an Undertaker vs. Kane match, they are never good. This shouldn’t have been any different. But Vince McMahon and company were pushing this match as a possible main event. It was highly forgettable as the Undertaker didn’t really look like his old character and he won (like always), thus making it even more predictable.

While those two matches alone could’ve doomed the PPV, there was enough good to make it highly enjoyable. Chris Jericho doesn’t get enough credit in carrying angles, matches, and just being so charismatic that you look forward to whenever he comes on the TV. And if not for Jericho wanting to work with his friend Christian, Christian might’ve not gotten the chance to work this hot feud between him and Jericho. And let’s not forget the lovely Trish Stratus. It all started with a bet.

Christian and Jericho bet each other one Canadian dollar that they could bed Trish and Lita. And then Jericho fell in love. And Trish fell in love. And the bet wasn’t really a bet anymore until Trish found out that it was all a bet. But Jericho was still in love and Trish was still in love and Christian was there to mess it all up. And at Mania, they had a really good match that pretty much put the PPV in gear and then in a nice twist, Trish sided with Christian. Christian won the match, and got the girl. It’s good to be Christian.

John Cena won the opening match against the Big Show, winning the US Title in the process. It was a decent brawl with a good ending. Cena had Show up in his FU finisher (we’re talking putting 450 pounds on a 250 pound man’s shoulders) and Show kicked out. Cena then pretended to grab a foreign object to win the match but the ref stopped him. As the ref was disposing of the foreign object, Cena used his big lock to knock out the Show and win the match.

The other match I was most looking forward to after both Benoit’s and Guerrero’s matches was the return of The Rock & Sock Connection (Mick Foley and The Rock) against Evolution (Randy Orton, Batista, and The Nature Boy). What was supposed to be Foley’s revenge on Orton turned into Flair and Rock stealing the show. Rock popped the crowd by mimicking Flair’s classic moves and Flair was taking some sick bumps for an over 50 year old man with neck problems. And I popped when Foley did the classic elbow drop from the canvas. In the end, Orton won the match with a RKO on Foley.

The two championship matches were each very good, but one was better than the other. Kurt Angle and Eddie Guerrero had a very nice match. It was mat and psychology based and made sense. But it wasn’t as hot as the Triple Threat Match between Chris Benoit, Shawn Michaels, and Triple H. Angle and Guerrero worked hard, but with Angle’s neck injuries, they weren’t going to be able to duplicate the crazy momentum and near insane intense heat that the Triple Threat Match would create. In the right finish, Guerrero outsmarted Angle to keep his WWE title, and whet the appetite for a series of matches that probably would be better than this was. In the Triple Threat, Chris Benoit put on a great performance and had the crowd in his hand. And when he had Triple H in the Crippler’s Crossface (with me yelling, “Tap you SOB, tap!” to the television), the crowd was going crazy. And it went even crazier when HHH finally tapped. The PPV finished with Benoit and Guerrero in the middle of the ring hugging, as two of the hardest working overlooked wrestlers alive. They finally were champions.