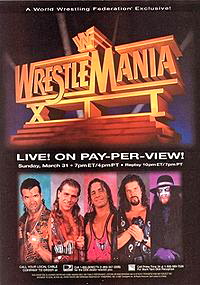 Wrestlemania XII was total one trick pony. There are wrestling cards that only promise one great match, but the possibly is there for good matches on the undercard. Here, WWE simply said, “We are going to give you the main event, and it’s going to be an hour long, and we really don’t care what else is on this show.” If you think about it from a time standpoint, you have one match that is going to take a full hour out of your three hour PPV. The rest of the matches and skits will have to be cut into two hours. Basically they cared about the main event and nothing else. I guess they did promise us the Ultimate Warrior again.

The Shawn Michaels vs. Bret Hart match was a good match, but over the years, it has been called the greatest match in Wrestlemania history by WWE. It’s not. Our own Big D calls it the most overrated match in Wrestlemania history. It was built up on television as “a boyhood dream” for Michaels to win the belt. As the story went, Michaels had been a wrestling fan as a kid and even though he was on the smaller side, he always wanted to win the WWF Heavyweight Title in a league of gargantuan monsters. Since Vince McMahon was giving us two great wrestlers in the main event rather than two slow moving, punching and kicking heavyweights, he made sure that we were going to see pure wrestling. He made it an Iron Man match. The rules of an Iron Man match are simple. There is a clock set with a one hour time limit. The person who scores the most falls in one hour wins. The hardest thing to do in a match like this is to keep the fans entertained at the same time as making sure the wrestlers don’t wear themselves out. Michaels and Hart paced themselves, but it still wasn’t intriguing enough live as many of the fans left before the match was over. Some detractors say that although they were entertained for most of the entire hour, they didn’t like the finish. Neither man won a fall in the entire hour and Bret Hart decided that since it was a draw, he was still champion. WWF President at the time, Gorilla Monsoon came out and said there must be a winner and ruled that the contest must continue and there would be a winner in sudden death. Soon thereafter, Shawn Michaels broke the Hitman’s heart with the sweet chin music and won the match and the title.

Does one match make or break a card? In this case yes. The strength of that match makes this Wrestlemania watchable, even if like Big D says, it’s overrated. At least they told a good story. The rest of the card was absolutely horrible. There were only six other matches on the card and of those six, the only one that was decent was Stone Cold Steve Austin vs. Savio Vega. Vega was really Austin’s first feud with his new “Stone Cold” character and getting wins over him helped establish him as an up and comer, even though he was awesome in WCW years before. The big slap in the face to this match, which Austin won, was that they cut away from the match to show so-called live coverage (but really taped) of the Goldust vs. Roddy Piper “Hollywood Back Lot Brawl” which was horrendous beyond imagination. The entire plot to their feud consisted of Goldust coming on to Piper and Piper being a man’s man, trying to turn Goldust into a “man”. It really wreaked of trying to be edgy but came across as way low class. They started in the back lot and Goldust hit Piper with a car, which according to Piper’s book, was the real deal. The match took on a new level with Piper following Goldust driving a “Bronco” like OJ Simpson with the cops chasing him down the freeway. It was cheesy beyond belief. They finally went back to the arena and finished off the match, with Piper winning. It is one of the worst gimmick matches of all time.

One of the more hyped matches on the undercard was the Undertaker defeating Diesel, in a match-up of two huge guys who weren’t going to give us a classic. They were just going to beat each other up. I’ll give the Taker credit for trying to make this a match, but Big Daddy Cool Diesel didn’t make it easy on him. Luckily, it wasn’t a long match and the Taker won. I also believe that Diesel was on his way out of the company.

The second most pushed feature on the show was the return of the Ultimate Warrior. The Warrior first disappeared after SummerSlam 1991, came back for Wrestlemania VIII, left again shortly there after and was making yet another comeback. He beat up a young up and coming Hunter Hearst Helmsley (with Sable) in a matter of seconds. Hunter made sure this never happened to him ever again. As for the Warrior? He was gone soon again and wound up in WCW where he and Hulk Hogan would have one of the greatest terrible matches of all time.

Wrestlemania XII was really about one match with two company stalwarts. WWE has romanticized the match over the years. It’s not the greatest match in Wrestlemania history, but it’s still solid work from two of the best ever.