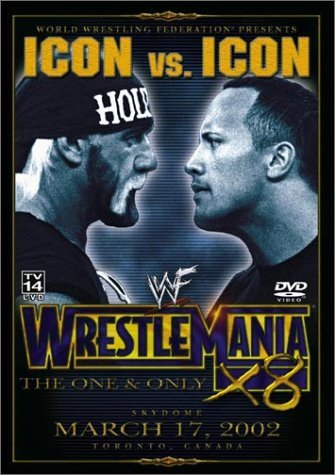 When you think of Wrestlemania X-8 in five years, you will remember one match, and only one match. You’ll be surprised to see that Edge had a match with Booker T which started because Edge swiped a commercial deal that Booker T thought he should’ve received. You’ll forget that there was Diamond Dallas Page’s one and only Wrestlemania match. You might even forget that Chris Jericho and Triple H were in the main event.

The match you will remember however is the one that pitted Hollywood Hulk Hogan vs. The Rock. Hogan had just come back to the WWF with his NWO cronies Scott Hall and Kevin Nash. McMahon brought them in to come shake up the foundation of the WWF. He wanted them to “poison” his own creation as he was afraid that Ric Flair was ruining his promotion. That was the storyline. The real story was that McMahon, as always, wanted to bring in some surprises right before Wrestlemania, to make Mania the most talked about show of the year. However, what he should’ve known was that the NWO was so “five years ago” and that it wouldn’t work today unless it was brought back as a new idea. Hogan was accepted back by the fans, but Nash and Hall weren’t seen as anything more than just regular guys. Hogan is a great manipulator and he positioned himself with a match against The Rock, who already had a great buzz on him as he was finishing up The Scorpion King. The initial build-up was excellent. Rock challenged Hogan and the audience was split on who they were cheering for. What they did afterward was hogwash and unbelievable, but let’s just forget that ever happened.


The match, while not the best match of all time, had the crowd mesmerized. It was two great showman in the ring, doing what they do best. Hogan, knowing he had at least half of the crowd in his corner, did his best to try and take the rest of them even though he was the heel. Rock played the sympathetic babyface who felt the crowd turning and did a few things that a bad guy would do. Who cares who won the match? It was the ability by each guy to play to the crowd and make them either cheer louder, or boo louder based on their every move that was fantastic. In the end, The Rock won the match, but Hogan gained another year of shelf life. He turned face at the end, and thus Hulkamania was reborn, at least as far as the audience was concerned.

The main event featured Chris Jericho defending his Undisputed Championship vs. HHH. The match wasn’t a 5-star classic by any means, but it was a solid match that had psychology and a meaning. Too bad they wasted two months making it Stephanie McMahon Helmsley vs. Hunter Hearst Helmsley. Chris Jericho, as champion, should’ve been angled as someone who would stoop to any and every level to keep his title. However, they used him as Stephanie’s second fiddle and ruined what could’ve been a very good Wrestlemania main event. The finish was done well, and HHH took the gold.

Kurt Angle put on a decent match with Kane. The story behind this match was that they held Kurt Angle back in case Scott Hall sabotaged his match against Steve Austin by doing Scott Hall like things, such as getting fired. However, when Scott Hall abided by all the rules and was a decent citizen, they had to go with Angle in a hurried match with Kane. Kane is one of the better big guys in the ring, only because he’s fairly athletic, and Angle, being the one of the best guys going, pulled off a decent match and won.

Speaking of the Stone Cold match with Scott Hall; this was one of those “straws that broke the camel’s back” as originally Hall was supposed to go over in the match, but Austin balked and they changed the finish. Austin wasn’t all that happy anyway and he no showed the next Raw show because of being burnt out. How you can mis-book Steve Austin is beyond me.

Another of the “big” matches was “The Nature Boy” Ric Flair vs. The Undertaker. The entire build up consisted of The Undertaker as the heel, beating up Flair, who was the part owner of the company. It was sort of a reverse of when Stone Cold Steve Austin and Vince McMahon were having their program in the late nineties. However, The Undertaker simply wouldn’t sell for the greatest champion of our day and he took most of the match. The match consisted of The Undertaker beating up Flair, while Flair would once in a while get a nice comeback, and then the Taker would kill him again. It was still an entertaining match because Flair could still go decently well at his age.

The opener consisted of Rob Van Dam in a match for the Intercontinental Championship beating William Regal in a mix mash of styles that simply didn’t work at all. RVD hit the 5-star Frog Splash to win the belt, so the fans at least started off happily. The tag team Fatal Four Way was disappointing as the WWF was building up Chuck and Billy at the time. They were fine for a television storyline group, but they were the worst workers in the match which also included the Hardys, the Dudleys, and APA. When you’re worse than APA, you’re worse than bad. The woman’s title match was decent, but got really sloppy at times. Jazz pinned Lita to retain her belt in a three-way match that also featured the lovely Trish Stratus.

Overall, the PPV was not one of Wrestlemania’s best. But you’ll never forget the night when The Rock and Hulk Hogan went toe to toe.