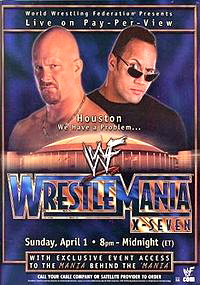 I can start this off by stating that this is the single greatest WWE card from top to bottom that I have ever witnessed. Although there were a few rocky match-ups and it took a while for the Houston crowd to get into, this is the greatest of all the Wrestlemanias.

One thing that helps this show standout that might get overlooked is the announcing. Paul Heyman took Jerry Lawler’s place as Lawler had quit the company when his wife, Stacy Carter (The Kat) was fired. Carter soon left Lawler. Talk about being ungrateful. Anyway, Heyman is outstanding in building up feuds and making matches seem important, and not yelling “puppies” every 5 minutes. And Jim Ross is at his usual high standard.

The marquee match-up pitted the People’s Champ, The Rock against Stone Cold Steve Austin. It was a babyface vs. babyface match-up, however in Austin’s home state, Rock was going to be turned heel by the crowd. The show was held at the old Astrodome in Houston and Austin was over like nobody’s business.

The show started slowly, but one match picked it up and the heat never stopped. Kurt Angle vs. Chris Benoit was the 2000s version of Ric Flair vs. Ricky Steamboat. While the match didn’t get as much time as the other great matches on this card, for 14 minutes, it might’ve been the best action on the card. At least the best action inside the ring. This was early in the history of their ongoing feud which in 2003 went even further with their classic title match at Royal Rumble. Angle finally got the win, even kicking out of the headbutt off the top rope.

One would think with Chris Jericho and Eddie Guerrero on the undercard, that the undercard had a chance to be outstanding. You’d be wrong. Chris Jericho opened the show against William Regal and even though Jericho won the match it wasn’t up to the standard you’d expect. I imagine that if they were in the same role today, they’d have an outstanding match, but they just didn’t click here. Jericho won to keep his IC strap.

Eddie Guerrero received the unfortunate luck of having to try and carry Test to a decent match. Not too many people have been able to do that. Actually, the only time I’ve ever been intrigued with Test is when Triple H stole his bride and was mocking him while he was doing it. But on this night, he couldn’t perform his magic with Test, in a match that was worse than the opener. Guerrero won the European belt with help of his buddies Saturn and Dean Malenko.

A match with Vince McMahon and Shane McMahon didn’t initially seem interesting. It actually looked like the worst match on the card. The match had an odd storyline to it. Vince was having an extramarital affair with Trish Stratus. Who could blame him? His wife became sick and comatose because of the stress he put her through. Steph sided with dad while Shane-O sided with mom, and Mick Foley was appointed as the referee. The match was no disqualification and they didn’t really spend much time in the ring. Vince told Trish to bring his wheelchair bound wife to the ring when it looked like Vince would win so Linda could see her son get beat. Trish brought her to the ring, Linda miraculously stood up and kicked McMahon in his grapefruits and Shane finished him off with the Van Terminator. My wife Trish turned face in the end. It was a fun match, with an awful storyline, but at least it was entertaining.

There were two â€œbestâ€ matches on this card. Someone like me will say that the main event was the best. But some will say that TLC 2 (tables, ladders and chairs, oh my part two) was the best on the card and you really couldn’t argue with either choice. The match consisted of the Dudleys, the Hardy’s, and Edge and Christian in a match where the goal was to climb a ladder and take the tag belts which were hanging from the ceiling. But instead of being simply a ladder match, like they had at Wrestlemania 2000, this time, tables and chairs were easily accessible and legal. Originally it was thought that Spike Dudley, Rhyno, and Lita would be involved in the match, but they were simply used as effective run-ins. The highlight bump for me was when Jeff Hardy was hanging from the belts, very close to victory and Edge ran up a ladder and speared him down to the mat. Just like in Wrestlemania 2000, Edge and Chrstian would win the match and the titles.

Triple H didn’t have a main event match since Austin and Rock were in the main event. He was overshadowed by his future brother and father in law. But low and behold, he was thrown into a quick program with the Undertaker and all of a sudden was second from the top. In this match, you saw a true hatred for each other. Undertaker looked like he hated Triple H, and Triple H the same. When you can create emotion, you’re doing your job. And Triple H did the job and kept Undertaker’s undefeated Wrestlemania streak alive.

Not too many matches have been as exciting, and at the same time left you scratching your head. Austin vs. Rock II (they did part three at Mania XIX) was better than the first in just about every way. Both men were faces, yet at the beginning of the match, Stone Cold was slowly turning. At the beginning of the match, they announced a stipulation that the match would be no disqualification. Stone Cold was using bells, chairs and doing everything to win. They were trying to force the heel turn. But because this was in Houston, Texas the fans wouldn’t boo him. Rock was playing the total face. He was taking all the abuse and dishing out the great comebacks. But the fans would just boo his moves. Both guys kept doing each other’s finishers, building toward their own finishers, and Rock had the match won until Vince McMahon interrupted the count. You figured McMahon was with Austin, but still, the crowd wouldn’t boo him. And when Austin finally had Rock pinned, and it was over, and he shook Vince’s hand and drank beer with him, the crowd was cheering louder than ever.

With Rock leaving to do a movie, they were already going to be short on babyfaces, so it’s still mind boggling to this day as to why Austin was turned heel. Was he a stale babyface? He might’ve been a bit stale from his 1998 run, but who wouldn’t have been? He was the biggest star in the game. But they were bull headed to turn Austin and it just didn’t take with the fans. It would be like turning Hulk Hogan heel in 1990. The fans weren’t ready to boo him at that point either.

Even though it was the greatest show that WWE had put on, it also started a heavy decline in business. You can’t blame this turn for all of the other terrible decisions that they made including botching the WCW invasion so badly that it would turn fans away in droves, but it was the beginning of the free fall. They had at least another year or two of strong business.