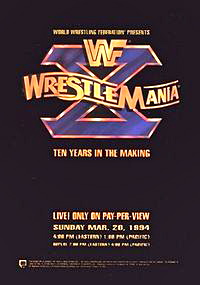 Just blame it on Lex Luger. Blame it on the fact that he was such an uncharismatic person that he was on the yellow brick road to the WWF championship and still didn’t win it. When Hulk Hogan left the WWF after losing the belt to Yokozuna, Vince McMahon had his replacement. He was tall like Hogan. He was blond like Hogan (well maybe a young Hogan with more hair). And he was more muscular than Hogan. Vinnie Mac’s kind of guy right? He was going to be the one to take the torch that Hogan left and he was going to run with it. There were some problems though. He couldn’t connect with the fans. He couldn’t wrestle an entertaining match. And after McMahon pushed him as hard as he could, he pulled the plug. It was the SummerSlam of 1993 where the Lex Express was going to ride into town and snatch that championship belt from the dreaded Yokozuna. When Lex didn’t win the belt that night, I knew McMahon didn’t think he was going to be the guy. They put all that marketing effort into a guy who WCW wouldn’t even put their money behind. It was a mistake for McMahon, but hey, he gave it his best to try to replace Hogan.

If not for Lex being terrible, history could’ve changed, and not for the better.

The guy who was supposed to be passed the torch from Hogan before Hogan decided he would only lose to someone bigger than him (Yokozuna) was Bret Hart. He was already given a small reign as champion when it was time to take the title off Ric Flair. But he lost it in that horrible match on a horrible PPV (Wrestlemania IX unless you’re Alan) with a horrible ending in which Yoko won the title, only to lose it to Hogan in an impromptu match. Let’s just say that Bret was the back-up plan. It didn’t need to be like this had Hogan only lost the belt to Bret at SummerSlam in 1993 before he balked at doing a job to someone as small as Hart. It probably didn’t even cross his mind that Bret would’ve probably carried him to the best match of his career, thus making him look strong in losing.

The WWF was struggling at the time to try and connect again with the fans. They started Monday Night Raw the year before and were drawing nice ratings even if house shows were struggling. But this was Wrestlemania, and for one night, all was forgotten. And where better to have it than Madison Square Garden in New York where the original Wrestlemania was held.

The lineup wasn’t all that strong, but there was a mystery around the night. It started when they booked the Royal Rumble to end with two winners rather than one. Bret Hart and Lex Luger both eliminated each other to end the match and were both declared winners. Vince created a scenario at Wrestlemania where the championship would be defended twice. During a coin flip, it was decided that Luger would fight Yokozuna first, with Bret facing the winner in the main event. But Bret didn’t get off easy. He was also booked in a match with his crazed brother, the late Owen Hart.

That match started off the PPV and it started it in grand style. It was an outstanding match, especially as one to start off a PPV. You don’t necessarily want the best match to start first because the rest of the night can be a let down, but they had their ace in the hole later and we’ll get to that in a few paragraphs. It was great that they held off the Owen Hart full turn until Royal Rumble, because the fans anticipated this match-up big time. And when Owen came out on top, it was all more important as it established him as the guy who beat the guy who won the championship later in the show. Sort of wrestling foreshadowing if ya will.

Many people thought Lex Luger would beat Yokozuna to then face the Hit Man later in the main event. However, it didn’t work out that way. Mr. Perfect was the special guest referee and he turned heel, thus costing Luger the match. There was the longest and worst rest hold in the history of wrestling in this match and it was a pure out and out stinker. At least the Perfect heel turn in the end gave Luger a program to work since his title chase was over.

While the majority of the matches on the card were awful, there was a second diamond in the rough. The Hart brothers’ match was great, but this match was arguably greater. Shawn Michaels faced Razor Ramon in a ladder match for the Undisputed Intercontinental Championship. It is the match that gimmick matches are measured by. The match was so significant that it’s alluded to almost as much as any match in WWF/WWE history. It was a match that helped etch HBK’s greatness in stone. The match was before its time in the spots and the bumps that were taken. And it wasn’t just madness. There was a method to the madness. HBK didn’t even win the match, but he was better off because of it in the eyes of the fans. It wasn’t even the first WWF ladder match as Bret and Shawn had one a couple years earlier, but it’s the most remembered one. The match consisted of both Michaels’ and Ramon’s IC titles (Michaels had been out and in the mean time, Ramon won the belt and Michaels came back and they had to wrestle for the undisputed IC title) suspended high above the ring and the only way to win the match was to climb the ladder and grab them both. The wrestler who grabbed them both was declared winner and champion. But the ladder was used as a weapon and also as a platform for beautifully timed spots. If you watch any match in the last ten years for what it’s meant to the company today, this one is a damn good choice.

Then came the main event with Roddy Piper as the referee. It was Hart vs. Yokozuna for the championship. If Yokozuna had won, it would’ve been anticlimactic. You knew Bret had to win, thus getting his win back from Wrestlemania IX. And that’s what happened. It wasn’t a great match, but it was one that is remembered because of how it ended in the ring with many wrestlers from the back supporting the Hit Man’s win and defining it as something special.

The only other match that really captured my interest was the grudge match between The Macho Man Randy Savage and Crush. It was another gimmick match where you had to beat the other man outside the ring, and beat him so badly that when you got back to the ring, he wouldn’t make it back to the ring by the count of twenty. Savage won the match even though the finish was sloppy. Savage took Crush to the back and tied him to a pulley and pulled the rope attached and raised him in the air. However, Savage didn’t tie the rope well enough and when he let go, Crush was dropped on his head. It wasn’t the way it was supposed to work, but when it’s live, sometimes it works that way.

As I said, everything else was just horrific. The Quebecers defended their belts against one of the worst tage teams ever, Men On A Mission. They had zero charisma and even less wrestling skill. The Quebecers put on a decent show, but with MOM, there’s no way the match was going to be any good.

Wrestlemania X meant that Vince McMahon’s vision had longevity and success. People didn’t think the original Wrestlemania was going to work, but it did. And this year is the 25th show. I think it’s been a success.

2 thoughts on “Wrestlemania X – Blame It On Lex”