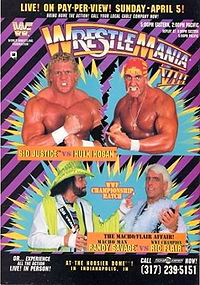 Vince McMahon had it right on his plate. The biggest dream match in the history of professional wrestling. And he flinched.

In the summer of 1991, Ric Flair was unhappy with what was going to be a pay cut with WCW. He was scheduled to lose to Lex Luger at the Great American Bash, but was then subsequently fired as he didn’t want to drop the title without a new contract. Instead, Luger faced Barry Windham in a cage match with very little buildup and started a very forgettable championship reign. Across WCW arenas around the world, the loudest chants weren’t for Sting, or the newly crowned champ. The loudest chants were for Ric Flair. I went to a WCW event in the fall of 1991 and throughout most of the show was a chant of, “We want Flair”. But Flair was gone. He showed up on WWF television in the fall and had the old ten pounds of gold with him. Immediately, fans expected he and then WWF Champion Hulk Hogan to battle. It was a dream match that everyone had been wanting to see for at least 8 years. He started to become a thorn in Hogan’s side immediately. When Hogan lost the belt to the Undertaker at the Survivor Series, Flair was in the middle of it. And then on This Tuesday In Texas, which was just 5 days later on PPV, Hogan supposedly won the title back, but it was the held up. The title would be decided at the Royal Rumble. Ric Flair won the match by wrestling for close to one hour and outlasting everyone. It would seem that the logical challenger would be Hulk Hogan. Vince McMahon could then show the world that his champion was better than the old NWA champion. And it could be decided on the biggest stage in wrestling. Wrestlemania VIII was held at the Indiana Hoosier Dome. It could have been perfect. But McMahon flinched.

There were a couple of reasons why Vince would’ve flinched. For one, they went to Hogan vs. Flair very soon around the house show circuit and after a few runs, it wasn’t special anymore. And also, Vince has always been about pushing bigger guys. He saw a star in Sid Justice, formerly Sid Vicious. Sid was a huge guy with a jacked up physique who was supposed to be someone WCW was going to try and utilize as a top heel. He had one title match against Sting, but didn’t win it in an odd finish that saw Barry Windham dressed up as Sting and taking the pin. But the real Sting came out and then pinned Vicious. Yes, it was hoaky. But Vince came calling and Sid left WCW for New York. Initially, Vince put Sid with Hogan after SummerSlam 1991. Hogan and the Ultimate Warrior beat the team of the Iron Sheik who was at the time Colonel Mustafa, Sgt. Slaughter and their manager, General Adnan. Sid Justice was the referee. When Hogan and Warrior won, it was Hogan and Justice celebrating in the ring with Warrior no where to be found. If McMahon was going to flinch on the Flair vs. Hogan deal, this would be his backup. But who would Flair then wrestle?

In a hokey, but still effective storyline, Ric Flair promised the fans that he “had” Elizabeth before Randy Savage married her. The line was, “She was mine, before she was yours,” as if Elizabeth was some sort of property. Flair then showed pictures of himself with Elizabeth to further “prove” he was with Elizabeth before Savage was. Mean Gene Okerlund showed some investigative journalism later to prove that the pictures of Flair and Elizabeth were in fact doctored. Talk about going a long way for a storyline. Curt Hennig and Bobby Heenan promised to show some risque pictures of the lovely Elizabeth at Wrestlemania where Flair would defend his belt and against Savage. Talk about bait and switch. There were no pictures of Elizabeth. Instead of giving the WWF fans their dream match, Vince decided that Ric Flair vs. Randy Savage and Hulk Hogan vs. Sid Justice was a better fit.

There was one more marquee match and that was Roddy Piper defending his newly won Intercontinental Title against Bret Hart. It was an odd face vs. face match and was pretty much a passing of the torch. It was also one of the best matches Piper had wrestled in a long time. In the interview beforehand, Piper and Hart went back and forth picking at each other and it was the first time I’d heard Piper call Hart his family. Piper has been calling Hart his cousin for a while now, and while they aren’t related, I guess they are or at least were very close. The match was a back and forth contest where Bret Hart played possum several times and had a weird heelish feel to him. I always thought it was weird when Bret as the face, would do heelish things, but it was more so the “I’m smarter than you” gimmick. Piper teased going back to the Piper of old as he grabbed the ring bell, but thought better of it and went to his famed sleeper hold where Hart then walked the rope, put his weight on Piper, and Piper fell backward with Hart getting the pin. It was an excellent match and also showcased Hart as being a ring general. Just excellent heat and psychology.

The show started with Tito Santana as El Matador vs. Shawn Michaels. It was the end of Santana’s WWF career. In a cool trivia note, he also jerked the curtain at the first Wrestlemania. HBK promised that he would challenge the winner of the Bret Hart vs. Roddy Piper match for the IC belt. HBK won the stall fest as Tito decided that a side headlock was the way to go here.

Right after the match, there was a long interview with the Legion of Doom and the return of Paul Ellering. It was odd as the LOD got a huge pop, but the long interview sort of stopped the show momentum. They did this again after the IC title match as Bobby Heenan, who was on fire on this night, talked to Lex Luger, who was going to be involved in Vince McMahon’s WBF. Funny that just one year before, Luger and Flair were both feuding in WCW, and now, they were in the WWF.

The Undertaker beat an aging Jake “The Snake” Roberts in a forgettable match. The Taker didn’t sell two DDT’s and Roberts jobbed hard. There was a horrible 8-man tag match before Savage vs. Flair. Then we got the best match of the night. For purists, this was the closest you’d get in the WWF at the time to a classic wrestling match. Reminding me slightly of Ricky Steamboat vs. Randy Savage from Wrestlemania III, there were a ton of near falls and a lot of interference from Curt Hennig. Savage played the sympathetic babyface to a T as he was always coming up short. After Flair used the brass knucks and then finally put on the figure four, it was supposed to be the end. But surprisingly, at least to me at the time, Savage pulled through, rolling up Flair while holding the tights. It was a great match and because I figured Flair vs. Hogan was eventually being set up for SummerSlam, I had no idea Savage was going to win.

On the PPV feed for the show, there was a five minute intermission. Can you imagine Vince McMahon wasting five minutes rather than running some sort of package promoting his brand today? And then there were three meaningless matches before the main event, which goes to show you what McMahon thought of the title at the time when it wasn’t on Hogan. The WWF Heavyweight Championship match should be the main event right? I guess not if it’s not on Hogan.

Rick Martel vs. Tatanka was meaningless save for a few Heenan barbs. Tatanka won a quick match with a running high cross body. Money Inc. then defended their tag team championship against the Natural Disasters in another forgettable match. It was your simple huge babyfaces destroy heels and the heels save their titles by being counted out. And the last match before the main was Owen Hart vs. Skinner (Steve Keirn). It was another short one as Owen kicked out of Skinner’s reverse DDT and then rolled him up.

Finally it was time for the main event, which wasn’t much for the eyes, but did it’s job in maintaining Hogan as the man and letting Sid save face by kicking out of the dreaded leg drop. Sid controlled much of the match as it was your standard Hogan match. Hogan was being beaten from pillar to post and finally, he hulked up and went into his routine. After Sid kicked out of the leg drop, his manager Harvey Whippleman got in the ref’s face for what was the disqualification. After the match, Papa Shango came out to double team Hogan which basically meant someone had to save Hogan, and that one man was the Ultimate Warrior, albeit a smaller version of the Ultimate Warrior. It was a total mark out moment though. I remember watching this at my neighbor’s house with my sister and buddy and when we heard Warrior’s music, we all screamed, “Ultimate Warrior!” In the end, it was a fun night of wrestling because of the two great matches and the return of the smaller Ultimate Warrior.

I want to end this by saying I believe this was the last Wrestlemania where Bobby and Gorilla were the broadcast team. They were on fire on this night. While Gorilla was never Jim Ross because of his delivery and his awful lines like, “The fans are literally hanging from the rafters,” he had his own certain charisma and he always made the faces look good. But if I were to listen to someone do color, I’d listen to Bobby Heenan any day of the week. Jerry Lawler was good during the WWF’s stretch run in the late 90’s and early 2000, and Jesse Ventura tried to make main events seem like true sporting events, but Heenan was classic and had a certain wit to him. I hope he continues his road back to recovery from his jaw surgery.