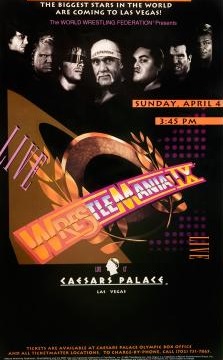 Alan and I have differing opinions on this show. He actually liked it while I hated it. I’ll sprinkle in some of his thoughts as we go.

The Hulk Hogan era was supposed to be over. The WWF was slowly changing the guard. They were trying to change what they had ingrained into fans on what wrestling was supposed to be. Bigger than life characters. Huge muscle bound guys are always better than smaller, faster guys. And Hulk Hogan was the best of them all. However, there was going to be a time when Hogan wasn’t going to be around. And during 1993, they were trying to change what they had been teaching fans for 10 years. Bret Hart beat Ric Flair for the championship to get his first WWF World Title reign in late 1992. I remember the day when I heard Hart won the championship. My friend told me to guess who had just beat Flair for the belt, and because I never expected the WWF to get behind Hart, I must’ve went through five guys before I guessed Hart. And I expected him to be nothing more than a transitional champion. However, it showed that the WWF was trying to find someone new to carry the torch so to speak. However, Hogan came back into the picture. It was supposed to be the first Wrestlemania without Hogan. Pro Wrestling Illustrated’s Wrestlemania preview didn’t even list Hogan as being on the card. Hogan came back into the picture quickly as Vince probably didn’t see Wrestlemania being big without him. Hogan held all the cards back then, which is a far cry from where he is today. Of course, Hogan reportedly wanted to win the belt immediately, but if Bret Hart was ever going to be anything, losing it to Hogan in a squash would’ve killed any steam he had. Hogan was then put into a quick feud with Money Inc. where he saved his good friend Ed Leslie, better known as Brutus Beefecake, from a beat down and they played up on the true story of Beefcake having to get reconstructive surgery on his face in a para sailing accident. Hogan and Beefcake were now to challenge Ted DiBiase and IRS (Mike Rotunda) for the tag team championship. They were terribly called The Mega-Maniacs.

It was a very boring match, but the crowd popped like crazy for it. Hogan was up to his usual antics very much so through the entire match playing up to the crowd. With DiBiase and IRS in the ring, it made the match at least watchable, but the fans very much so wanted a title change. The finish was extremely silly with Jimmy Hart counting a double pin fall that was later overturned by the referee. When Hogan and Beefecake didn’t get the belts, that should have told the viewers something, considering Hogan had never been in anything short of the main event in Wrestlemania.

The setting for Wrestlemania IX was odd. It was held outdoors at Caesar’s Palace and there was a toga theme. Also interesting was the appearance of Jim Ross, who didn’t seem to be the WWF’s style of announcer. He was more of a wrestling fan’s announcer, not the sports entertainment that the WWF provided. It could’ve also shown a trend to get more into actual wrestling that I talked about before hand. Paired with Ross were Bobby Heenan and Randy Savage. It was interesting to me why Savage was behind the microphone and not in the ring. It seemed Vince McMahon thought Savage’s best days were behind him. It was only three months before when I thought Savage was going to win the Royal Rumble and go on to face Hart for the championship here. But Yokozuna eliminated him and became the number one contender. The weather didn’t entirely cooperate as it wasn’t all that bright, and the show was very dark. It was an ominous setting. And that didn’t bode well for the show.

I must note first of all, that I am a HUGE mark for outdoor wrestling. This show could have been far worse than it was (YES that is possible smartasses!) and I still would have enjoyed it. Heck I even enjoyed all those Hog Wild shows that were basically just a bunch of racist bikers telling Harlem Heat they were gonna kill ’em and shouting boring at Malenko and Benoit! Outdoor wrasslin’ man, I just love it, no matter what.

The night started with a decent Intercontinental title match with a bad finish, and it was a night of bad finishes. Shawn Michaels took on an undefeated Tatanka. I remember when Chris Chavis (Tatanka) first debuted. I read about him in one of the old Pro Wrestling Illustrated magazines and watched him on Prime Time Wrestling as Chris Chavis. Next thing you know, he’s wearing a head piece and coming out doing rain dances as the Native American Tatanka. He did fit the bill as he did have Native American blood at least. He received a huge push when he initially came into the WWF, but he fizzled almost as quickly. In this match, he and Shawn Michaels put on a decent match, and it was probably the best match on the card, but for an opener and especially the Intercontinental Title match, it wasn’t all that it needed to be to set up the night. As I said, the finish was horrid as Tatanka won by countout.

The second best match might’ve been one with Lex Luger involved. Yes, it’s true, Luger had a good match with someone else other than Ric Flair. This time, it was with Mr. Perfect, the late Curt Hennig. Mr. Perfect made Lex actually look good in a match where they tried to sell that Lex, as the heel, outsmarted Mr. Perfect and won the match with a backslide, though Mr. Perfect’s legs were on the ropes. This set up a cool short feud between Mr. Perfect and HBK as after the match Perfect went after Luger and a shirtless HBK joined the fray and jumped Hennig.

In the late 80’s and the early 90’s there was one thing in tag team wrestling that you could take to the bank. The Steiner Brothers would be in an entertaining match. Scott Steiner especially, was a good enough wrestler with a Frankensteiner maneuver that was the one move in wrestling that you had to see. He was already a big guy, but not as huge as he is today and to see him give someone a standing hurracanranna was a sight to behold. However on this night, the Headshrinkers were bad enough to make the Steiner Brothers rather boring. Scott did win with his finishing maneuver, but it was after a long and boring affair that could’ve been cut 5 minutes and would have been better.

First and foremost, one of my favourite tags at the time, The Steiners vs. Headshrinkers. I re-watched this match last year and it totally holds up.

This specific Wrestlemania seemed to be rushed as far as some of the matches were concerned. Razor Ramon vs. Bob Backlund? Who wanted that match? Razor was still early enough in his WWF career to where he wasn’t the “bad guy” yet who eventually became a semi-main eventer, but Bob Backlund was an ex-champion who seemed to be brought back as a joke. In a weird match-up Razor beat Backlund with a cradle. Did we also need Crush vs. Doink “The Clown”? They made Crush look dumber than he was supposed to look by losing because another Doink came out to attack him with a fake arm. This was the WWF at it’s worst. Wait, I spoke too soon. In what could be the worst Wrestlemania match of all time, the Undertaker beat Giant Gonzalez, who was El Gigante in WCW just a few months before, by disqualification when Gonzalez used a foreign substance poured onto a rag and “suffocated” the Undertaker with it. I’ve used the word horrendous a few times already, but I can’t think of another way to describe this.

We had some awesome entrances also. Lex Luger rolling out with a bunch of hot babes holding mirrors was good times (shutup Duan!) and of course the Undertaker and his RAVEN was epic. Almost as epic as the match that followed pitting Taker against the legendary Giant Gonzalez! A true clash of the titans that blew my mind as a kid.

There may have been just a hint of sarcasm in that last statement.

Remember when I said that when Hogan and Beefcake didn’t win the belts, we were probably going to see Hogan again? Well, it’s not like I haven’t seen this PPV before so I can’t say I predicted it, but even when I saw it the first time, I was waiting for Hogan to come out for the main event. But I couldn’t believe what actually happened. Before I get to that, let’s talk about the actual main event. It was the new leader of the WWF versus a former Sumo wrestler doing a Japanese gimmick, even though he wasn’t Japanese. Yokozuna would go on and win the match against Hart, which I hated at the time, but what happened after that was just disgusting, if you were Bret Hart. After Hart lost, Hogan came down to dispute the fact that Mr. Fuji threw salt in Hart’s eyes and should’ve been disqualified. At that time, Fuji challenged Hogan to an impromptu match for the title vs. Yokozuna. Hogan tended to Hart who told him to go for it. Then Hogan won the belt. It took all of 15 seconds. Remember when I said Hogan held all the cards? Well he just put himself back into the picture and left the Hitman laying in waste. The storyline after Wrestlemania was that Hogan and Yokozuna would face off at the newly created King of the Ring PPV and Yokozuna would win and we’d never hear of Hogan in the WWF again until 2002. The supposed program was going to be Hogan dropping the belt to Bret Hart at Summerslam of that year, but allegedly Hogan balked, and instead lost to Yokozuna at King of the Ring. Hart finally got his belt back the next year.

I cannot however defend the finish of the show though. As a child of the pink & black and NOT the red ‘n yellah, I was disgusted to see that asshole Hogan (who I haaaaated) coming out and stealing the spotlight. That sucked majorly. However the match prior with Bret and Yoko ruled and did a great job getting Yoko over until you know who showed up.

Sure it caught the prime of my wrestling childhood fandom, but even so, I think this was a cool ass Wrestlemania.

I can say this was the worst Wrestlemania of all time. There were other bad ones like Wrestlemania IV and 13, but at least there were memorable moments on those shows. This was simply forgettable. I think Alan disagrees.