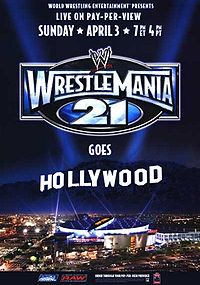 In 2004, Vince McMahon gave die-hard wrestling fans their wish. Undervalued wrestlers, Eddie Guerrero and Chris Benoit were at the top of the mountain and fans were happy. But soon thereafter, both men who were at the top of their careers, were soon beltless. Guerrero lost the WWE Championship to JBL who was a good character, but not a wrestler of Guerrero’s caliber. Benoit would eventually lose his World Championship to Randy Orton in August of 2004. In Guerrero’s case, he wasn’t ready to be champ according to him. He wasn’t ready to handle the responsibility of being in the main event every week and being the most important wrestler on the Smackdown brand. Benoit’s reason for losing was a little different. Vince McMahon wanted to capitalize on a hot Randy Orton, even though it killed Orton in the process.

As Wrestlemania 21 neared, the two champions were Triple H from the Raw brand and JBL from the Smackdown brand. Vince was ready to use younger (not by age in Batista’s case, but by how long he’s been around) stars and see if they could become headlining stars. These men weren’t undervalued ring generals like Guerrero and Benoit. You could actually make a case of them being overvalued and overrated. But one thing was certain. Both guys were over with their fans. Dave Batista wasn’t supposed to be the guy in the role of future champion. That guy was supposed to be Randy Orton. But when Orton beat Benoit for the belt at SummerSlam, he was subsequently turned face, and Triple H came in, killed him dead and picked up his lost pieces (the championship) in the process.

Orton was no longer championship material, and he was thrown into a match with The Undertaker. When Orton was floundering after the reasonless face turn, Batista became “the cool one” of Evolution. Big Dave was now being booked in Orton’s spot and he was a cool heel. His angle with Triple H was becoming a huge box office draw, and Batista was on his way. But was he ready to take the strap at Wrestlemania?

John Cena had been a very good character for WWE. While not always in the main event picture, he’d done well for himself with his rapping style gimmick. And in 2005, he released a rap album and near the tail end of 2004, finished up a movie. It was obvious at the Royal Rumble in Fresno, that WWE considered Dave Batista and John Cena to be their next superstars as they were the last two guys in the main event battle royal style match. Vince McMahon saw big things in both men and they were put in their respective brand main events, trying desperately to win the World and WWE Heavyweight titles.

What else did Vince McMahon have up his sleeve at Wrestlemania? Well what he didn’t have up his sleeve was almost as important as what he did. Since Wrestlemania 21 was in Hollywood, one would think that The Rock would be involved somehow. But he wasn’t. And who didn’t want to see Mick Foley involved someway? He wasn’t either. So Vince went to well with three guys he always goes to the well with. Stone Cold Steve Austin, Rowdy Roddy Piper, and Hulk Hogan. Austin and Piper were involved in a Piper’s Pit segment and Piper and Hogan were also involved in the Hall Of Fame Ceremony the previous night. Hogan would get involved with Muhammed Hassan and Kosrow Daivari when they attacked Eugene. And Piper and Austin went toe to toe verbally as Piper was the first guy to be able to quiet the “What!” crowd chants that I’ve seen. Carlito soon came out and Austin gave him a stunner right before giving Piper one.

The first hour and a half or two hours of this show might’ve been the greatest hour and a half or two hours in Wrestlemania history. The show opened up with Rey Mysterio wrestling Eddie Guerrero in a match that saw the Smackdown Tag Team Champions wrestle each other. It was simply the old, “who is better” match and while it was slightly unfulfilling, it was still a good wrestling match that was too short on time. Rey won a back and forth match that led to their summer long soap opera type feud.

Chris Benoit, Chris Jericho, Christian, Edge, Shelton Benjamin and Kane had nothing to do for this show. So low and behold, someone (Chris Jericho) said, let’s throw these guys in a match together and put a ladder in there. The winner would get a future world title shot when they grabbed the briefcase several feet high above the ring. And the only way they’d be able to do this is to climb up the ladder. The match was full of a ton of great high spots and Chris Benoit was the MVP. Edge won the match, but this really got the show going.

Whenever someone wrestles the Undertaker at Wrestlemania, you pencil them in for a loss. The Undertaker just never loses at Wrestlemania. Young Randy Orton was the one who was going to be staring at the lights by the time this match was over. However, it was a strong match. Old school fans were happy to see Cowboy Bob Orton come in and interfere, cast and all. Cowboy Bob was inducted into the Hall of Fame the night before alongside Hogan, Piper, Paul Orndorff, the Iron Sheik, Nikolai Volkoff, and Jimmy Hart. While The Undertaker won the match, he gave Young Randall a lot and didn’t maim him like everyone initially thought he would. Three matches in and all were really good.

Of course, with Trish Stratus vs. Christy Hemme coming up next, you figured the entertaining matches were going to end. But if you were male watching this, you were entertained in a different way. Trish Stratus is just an amazingly talented woman and she made this match with Christy, who can’t wrestle to save her life, not only interesting, but also, entertaining in its own right. While it wasn’t a good match, Trish is just so damn good in her character that I didn’t hate it. And she also looked spectacular, as she always does. She could be dressed as a lumberjack and still look fine.

Most die-hard wrestling fans were looking forward to Wrestlemania for one reason; HBK vs. Kurt Angle. It was a dream match that hadn’t yet happened and was one for the ages. Both guys were on their game and they put on a show. The match was fantastic with the back and forth effort and what might be the greatest submission spot this side of Stone Cold Steve Austin bleeding profusely in the Sharpshooter. Kurt Angle put HBK in the ankle lock, and HBK fought for what seemed like minutes, until he finally tapped out. Just a great overall match and one that you need to go out of your way to see if you haven’t already.

While there was a “match” with Big Show and Akebono, it was just there to give the crowd something to be quiet about. Unless your one goal in life was to see Big Show’s butt cheeks, just as much as you need to see HBK vs. Angle, you have to go out of your way to avoid this.

The two title matches were similar in how they were booked. Heels beat on the faces until the big comeback and faces win the match. But, the way in which the matches were won was pretty anticlimactic. John Cena was taking a beating from JBL for the entire match, and then made his one big comeback, hit the FU, and the match was over. It was over far too quickly for a former champion whose claim to fame was that he hadn’t been beaten in almost a year. JBL’s gimmick was that he seemed like he was going to lose, and then by the skin of his teeth, he’d pull out the match and keep his belt. Here, Cena hit his one big move, and the match was over. While Cena tried his best, this match didn’t seem all that important for the co-main event.

But Batista’s did. Interestingly enough, HHH decided to book a decent wrestling match, though he might’ve beat up on Batista longer than the crowd had wanted him to. Batista is an interesting character in that he has this cool persona with his huge ripped up physique, but wrestling long matches is definitely not his forte. And here, since it was the Wrestlemania main event, HHH made sure we saw an actual wrestling match, rather than Batista running over him like much of the crowd probably wanted. Batista sold for much of the match before winning with the Demon Bomb. 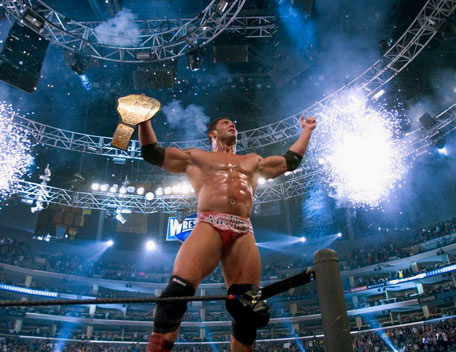 A new generation was born as John Cena and Batista were the new champions at the end of the show, and while Vince gave us some old legends to remember, he also gave us two new stars to look forward to. Whether or not you’re going to remember Cena and Batista in the same light as Hogan, Austin, and Piper is the question.

Photo of Batista shared by Wikipedia under fair use rules