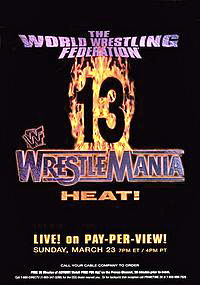 To preface this review, I will let you know that out of all Wrestlemanias, this one drew the smallest PPV buy rate. It also is considered one of the worst cards from top to bottom in Mania history. However, there is one reason why this isn’t the worst Wrestlemania ever. Stone Cold Steve Austin vs. Bret “The Hitman” Hart is why. The politics behind the match are laughable. After Bret Hart put over Shawn Michaels in the main event of Wrestlemania XII, they were supposed to build for a rematch at Wrestlemania 13 with Shawn then putting Bret over. Unfortunately, whether you believe that Shawn didn’t want to put Bret over, or that he was injured, that program didn’t happen and thus, Stone Cold Steve Austin vs. Bret “The Hitman” Hart did. Shawn didn’t even wrestle on the card. This match had a lot of significance in branching out Stone Cold’s character. The program did two things perfectly. It established Stone Cold as someone who would never quit and it also helped turn him face, while turning Bret heel at the same time.

The most interesting non-main match on the card was a very snotty Hunter Hearst Helmsley (before he made the DX turn into Triple H) who was seconded in the ring by a very muscular and masculine looking Chyna facing off against Goldust. They actually had a really good match. The kicker was watching Chyna throw around Marlena like a rag doll. That one spot helped make her into a frightening character. She’s still frightening today, but for different reasons.

There was a star driven six man tag match that was also on this card. The Legion Of Doom (or Road Warriors), who were past their prime, teamed up with Ahmed Johnson. If you’ve never heard of Ahmed Johnson, it’s because he was only in the WWF for a couple of years. He was an immediate sensation as a huge and mobile big man, yet he was very sloppy in the ring and people didn’t like working with him because of it. He later tried to make a comeback in WCW years later as Big T, but he was way out of shape and went away very quickly. They took on Crush, Farooq, and Savio Vega in a Chicago Street Fight which is similar to your modern day hardcore match, except the match wasn’t “falls count anywhere”. The match served it’s purpose which was to have LOD, who were always billed from Chicago, get over huge. And putting Ahmed in there with them helped establish him, but also, give the aging tag team some of his rub. However, the match wasn’t anything memorable and it was sloppy at times. But at least the crowd was happy.

The Rock wrestled his first Wrestlemania against The Sultan who was Rikishi in his slimmer days and under a mask. The match was nothing memorable, but it’s cool to see how different the Rock looked as Rocky Maivia. He wore his hair longer in the front and just looked like a geeky babyface. After he won the bout, his pop Rocky Johnson came out to help fend off the heels the Iron Sheik and Bob Backlund who attacked Rocky after the match. Rocky had only been around for six months before this match and he was already the Intercontinental Champion. He was really shoved down the fans’ throats and it’s no wonder the crowd turned on him, but in the end, it was the best thing that could’ve ever happened to him.

The tag team title match was interesting in that you had two big guys in Mankind and Vader taking on two smaller guys in the late Owen Hart and the late Davey Boy Smith. Watching this match is pretty because both Smith and Hart are no longer with us and in their primes, they were outstanding wrestlers. Ok, maybe only Owen was outstanding. Mankind and Vader were booked as favorites even though they weren’t the champs. The match went to a double countout.

There was a tag team elimination match to start the show that was awful, and only needs partial mention here. The Headbangers won and they would go on to receive a tag title shot sometime in the future. It was a match seemed to be thrown together at the last minute.

One of the worst main events in the history of Wrestlemania happened on this show. In a match that could be described as one of the most boring matches I’ve seen, the champ, Sycho Sid lost his championship to the Undertaker in what would be his second run as champion. His first was a five day stint in which he beat Hulk Hogan at the main event of the Survivor Series, only to lose the very next week against Hogan on a PPV entitled, “This Tuesday in Texas”. The WWF tried to see what type of audience would buy two PPV’s in a span of five days of each other. Let’s just say they’ve never done that again. The match between Sid and the Taker was horrendous on all occasions. They tried to tell a story that no matter how much punishment Sid doled out, the Taker would keep coming back. Bret Hart, who wrestled just a half hour earlier, came out to help Undertaker win, but was simply establishing himself as a heel. The Taker would win the belt, then lose it to Hart at that year’s SummerSlam, and then we all know what would happen at Survivor Series.

Stone Cold Steve Austin was a bad ass heel who was transformed into a bad ass babyface in the span of twenty minutes. Bret Hart played the annoying babyface who hated how wrestling was changing and thus turned heel at the same time Austin turned face. The match was a “submission” match where it could only end when one wrestler submitted, or by a referee stoppage. Ken Shamrock of UFC fame was the special guest referee and this match would also introduce him to the WWF fans as “the baddest man on the planet”. Well, at least until next year when Mike Tyson came in.

The match was pretty much how Austin’s best matches are laid out. He would take a beating, give a beating, and then take a beating again. Because he was playing babyface, he sold a ton for Hart who was great in his role as a cheating technical expert. The match hit its crescendo as Hart had Austin in his Sharpshooter finisher and Austin was bleeding from his forehead, yet not giving up. He would look like he was out of it, then gain strength, but only to be out of it again. He passed out and Shamrock stopped the match. Jim Ross played it up awesomely and the picture of Austin covered in blood and in pain, yet not giving up will be played on WWE TV forever. Hart didn’t want to break the hold, but Shamrock made him. This was the precursor to Austin’s takeoff that happened shortly and made him the most successful guy in the business for the short stay that he was on top.