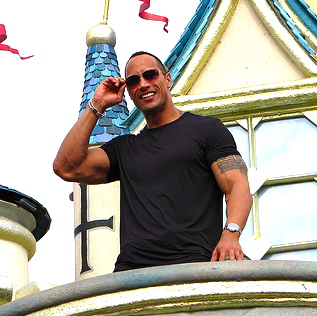 Why does John Cena try and find a way to bring Dwayne “The Rock” Johnson into every conversation he has when it comes to movies? Ok, maybe the interviewers ask him about Johnson since Johnson has made the successful transition from wrestler to movie star.

John Cena says that no matter what, he’ll never leave WWE, yet he continues to give small digs to Johnson at the same time. MTV.com has an interview with Cena, and I wanted to highlight a few quotes.

“He’s the guy I say I won’t be like,” he told MTV News. ” ‘Cause he’s although a very, very successful actor and super-nice guy, consummate professional, one of the hardest-working guys I’ve ever met, he left the WWE.”

In order for Johnson to be successful, he had to completely separate himself from wrestling. Wrestling is seen as such low brow entertainment that movie producers and studios don’t want to associate with someone who comes from a brand of entertainment where people die before their 40s from abuse, steroids are rampant (well, not that it’s not a problem with actors), and much of what they do is lowest common denominator kind of stuff. I’m sure that if wrestling didn’t have the kind of stench that it does, Johnson wouldn’t have had to completely disassociate himself.

“I really hope that people respond to ’12 Rounds,’ the movie is a success, and more movies come down the line, [but] I’m just not for leaving the WWE,” Cena said. “I love my job. I have a long-term commitment. That’s the one difference in my future career path and what he’s done.”

I’m a Cena fan. I love the guy. But his career path isn’t even close to that of Johnson’s career path. When Johnson was on top in WWE in 1999 through 2002, he was a much bigger star than Cena has ever been. And when it comes to the size of star in the movie industry, it’s not even close. Cena can’t compare himself to Johnson in either career, so his argument is meaningless.

“We have a very loyal fanbase,” Cena said. “For him to go on the front and say, ‘I love the business,’ and then not be a part of it [is something I’d never do].”

You can still love something and then separate yourself from it. You have the freedom and ability to do it. It’s going to be done for you anyway. One day, either Vince McMahon, Stephanie McMahon, or Triple H will tell John Cena that his day is done. And he will eventually have to step away. Does that have anything to do with his love for the industry? Not one bit. Johnson is a movie star and he can still be a movie star who loves the business. He has the freedom to choose to not want to be involved with it anymore.

“I’ve been trying to wrestle him. It’s not that I don’t think he’ll accept the challenge; he truly has a full plate,” he said. “I think our fans would like to see him come back to the ring. Dwayne Johnson or the Rock or whatever he wants call himself vs. John Cena. Let’s say ‘WrestleMania XXVI.’ “

Good luck with that one homie.

Photo of Dwayne Johnson by stewartcc and shared via creative commons

2 thoughts on “John Cena Is Not Dwayne Johnson”