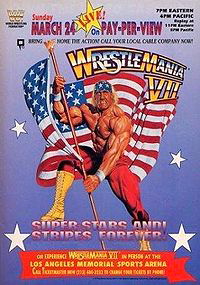 How did we get there? Well, after Hogan was beaten by Warrior, the WWF struggled without Hogan. House show business was down and people weren’t really paying to see Warrior like they were Hogan. Let’s face it. Warrior was fun to watch jump up and down while shaking the ropes, but he wasn’t going to be the man. He was horrendous on interviews, couldn’t wrestle for long periods of time despite his awesome physique, which tells you a little bit of how he got that physique, and simply didn’t draw as well as Hogan did as a champion. Also, the Persian Gulf War was going on at the time, and Vince McMahon decided it would be topical if the main WWF storyline carried the same timeliness. Enter Sgt. Slaughter. But not as you’d think. This time the Sarge was as an Iraqi supporter with General Adnan and later, Col. Mustaffa, who is most well known as the Iron Sheik, in his corner. It’s a horrible storyline if you think about it. It was a fake sentiment created by a storyline that took advantage of a war situation. Typical classy wrestling.

Since there was no way the WWF was going to sell anywhere near the number of tickets needed for the LA Coliseum, they opted for the smaller LA Arena, but used the excuse that because the Iraqi supporting Slaughter was so hated, they were worried things could get out of control in an outdoor stadium and thus had to move indoors. But they never answered the question as to how they would fit all those fans who bought tickets into the smaller arena. It’s because they never sold enough tickets.

In order to get Hogan back into the title chase as the All American savior against those disgusting Iraqi supporters, they had to get the belt off Warrior. To do that, they had the Sarge beat him at the Royal Rumble with help of the “Macho King” Randy Savage. This then set up the “Macho King” vs. the Ultimate Warrior in a match as the secondary main event with retirement stipulations. The loser had to retire from the WWF. Ya, I know, they never stay retired, but still, it was good stuff. And it got Hogan back where he was best, in the main event of Wrestlemania.

The retirement match between the Warrior and Savage was classic for it’s fake turned real emotion. Very rarely do you watch wrestling today and feel for the characters. Nowadays it rarely happens even though you can make a case that the performers are much better athletically in present day wrestling. But in this match, Randy Savage was in a zone. Warrior was decent in that he didn’t take away from the match, but other than his hokey pointing of his fingers towards the gods, there wasn’t much to him. But for Savage, it was the performance of a lifetime. He’s wrestled better matches, (vs. Ricky Steamboat), he’s had matches that meant more (vs. Ric Flair), but he was never better than here when it came to building the moment, making you believe that this was an actual contest, rather than a predetermined match. There were two Savage moments here. The first was when he had the Warrior down and decided to deliver 5 of his patented elbows off the top rope. Savage used it as his finisher, but he’d never done it 5 times in a row. And when the Warrior kicked out of the pin attempt, there was a look on Savage’s face that said disappointment, exhaustion, and “I can’t believe it” all in one. It was one of the all time faces ever in wrestling. And the second part was when Elizabeth saved him from Sherri after Warrior actually won the match, which became secondary even though Savage was now supposed to retire. When Miss Elizabeth came into the ring and Savage saw her for the first time, he gave another classic bewildered look. Then he put her on his shoulder and all was good in Macho land again. Just classic stuff. It was one of those few moments where the loser of the actual match was over more so because of it. Think Rock vs. Hogan at Mania X8. Warrior won, but was in a couple pointless feuds and then disappeared, only to reappear at the next Mania, and then go away again. In losing the match, Savage actually made his career hot again, going on to win the belt from Flair at the next Mania.

They tried to do the emotional angle again later that night as Virgil took on the Million Dollar Man, Ted DiBiase. Virgil was DiBiase’s man servant (think Farnsworth Bentley) and while he opened doors for DiBiase, they rarely made it seem as if he was slave like (Virgil is African American). That is, until Wrestlemania VII. They turned DiBiase’s character up a notch, and all of a sudden, Virgil was massaging feet and having to eat his own pride on several occasions. Enter Roddy Piper. Piper was an announcer at the time, but became a coach to Virgil, getting him to stick up for himself and finally, the stage was set for Virgil to get his pride back against DiBiase. Piper was in an accident either the day before the show or a few days before and came down the aisle with a crutch, and the injury wasn’t explained. The match was horrible, with DiBiase having to sell for horrendous offense, but controlling much of the match until Piper got DiBiase counted out. Piper looked legitimately hurt as DiBiase put the boots to him after the match, but in a scene that was supposed to inspire, Virgil yelled at him to “get up” like Piper had told him beforehand.

Another match that had some sort of emotional significance was Mr. Perfect defending the Intercontinental Title against the Big Bossman. I’ve never been a fan of the Bossman, and watching him in the ring with a great like Perfect was tough, but for a big man, Bossman wasn’t bad. Perfect sold for him like a champ. It was really a silly feud that climaxed because Perfect and Bobby Heenen, who took a break from announcing to be ringside with Perfect, had made fun of Bossman’s mama. Bossman won by DQ, which made the fans happy, but thankfully the belt stayed on Perfect.

This was the first of only two Wrestlemania’s that Gorilla and the Brain did together. While they weren’t as smooth as Jesse “The Body” Ventura and Gorilla were, they were much funnier. The Brain wasn’t as on fire as he was just one year later, but he was still great. Gorilla was a great set up man as well.

In a few other matches that the fans were into, the Nasty Boys defeated the Hart Foundation to win the tag team belts. It was the last Wrestlemania Bret Hart would wrestle as a part of the team, and it was a pretty good match, probably second to only Savage and Warrior as far as excitement. The Nasty Boys won by cheating of course, but it was good stuff as Bret took big time abuse and set up the hot tag for what seemed like 10 minutes. The Rockers (Shawn Michaels and Marty Jannety) got a big win over the Barbarian and Haku and it meant something because of the size difference between the two teams. It was a surprise to me at the time, even though I knew Haku and Barbarian were pretty much done as a team. In the silliest Wrestlemania match of all time, Jake “The Snake” Roberts beat Rick “The Model” Martel in a blindfold match that was brought upon us because they did an angle in which Martel sprayed his “Arrogance” fragrance in Snake’s eyes. Snake was supposedly blinded and this type of match was supposed to make things fair. It was one of the worst matches I’ve ever seen. It was simply a match where Snake would point in the vicinity of Martel and he would let the crowd lead him to Martel based on their cheers. It finally ended with a DDT. LOD defeated Power and Glory in a match that I was very interested in, but turned into a quick job for Power and Glory as the show was probably going long and they needed to go home early. LOD was put over huge here and I always thought that had Power and Glory ever been pushed correctly, they could’ve been a very good team. This Wrestlemania was also the first one for the Undertaker as they gave him Jimmy “Superfly” Snuka to demolish. This is significant because it was the start of an undefeated Wrestlemania streak for the Taker that he still holds today. He has never lost as Wrestlemania.

The main event was Hogan and Slaughter. They both did very good promos before the match started to build what was a simmering interest. Anyone with half a brain knew Hogan was going over. But, Vince and company did a very nice job at making it seem at least semi-important. It was very odd that Hogan gave the Sarge so much offense in this match. He almost sold as much here for the Sarge as he did for Andre at Wrestlemania III. Sarge tried draping the Iraqi Flag over Hogan and this sent Hogan into his usual conniption fit. Hogan played up his comeback huge and the crowd went crazy for his victory after the leg drop. Sarge even almost kicked out of the leg drop. I’m telling you, someone in WWF at the time loved the Sarge because he came off like someone Hogan luckily beat, rather than someone Hogan could easily take care of.

Wrestlemania VII had a ton of matches, and I didn’t even get to all of them because there were so many. All of the ones I didn’t mention were simply filler anyway. If you see this, watch it for one reason. Macho Man Randy Savage . He’s so good, it’s Oscar worthy. The Mickey Rourke of his time.