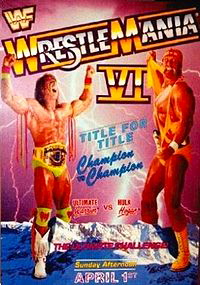 Dubbed, “The Ultimate Challenge”, Wrestlemania VI was a one match show. Everything on WWF TV at the time was done to build up this match. And there was good reason. It was the most important match for the company since Hulk Hogan vs. Andre The Giant at Wrestlemania III. Hulk Hogan was on his way out to do a movie and the WWF needed The Ultimate Warrior to be the man to take his place. Actually, they needed someone hip to rejuvenate Hogan’s slightly stale act too. Warrior was probably the right guy since his popularity was at an all time high. But technically, the money in Warrior was in him chasing the title, not being the one to hold it for very long. Thinking back, it might not have been bad to give it to Rick Rude or Ted DiBiase, and then have Warrior chase them for the championship, rather than having Hogan drop it to Warrior. But then again, this was one of the biggest money matches in the history of the company. The Warrior was already Intercontinental Champion and his popularity was nearly as high, or higher at the time, than Hogan’s. But that doesn’t necessarily translate into people paying money to see him. It was a short lived feud, and one of the reasons babyface vs. babyface feuds don’t work is because once the match is over, the feud is probably over unless someone turns heel.

The build up was incredible for this match. They first touched each other at the Royal Rumble. They both threw everyone else over the top rope and the two of them were in the ring together. They both went into the ropes. Hogan dropped down, Warrior jumped over him, Hogan missed a clothesline as Warrior ducked it, and then they hit the double clothesline that put both of them on the floor. Then they finally came to blows at Saturday Night’s Main Event as they teamed up together in a match. After they won the match, the Genius and Mr. Perfect jumped them, dumping Hogan out of the ring. Warrior fought off both guys until Hogan came back in the ring and Warrior accidentally hit Hogan. It was at this time that I figured out, even as a young wrestling fan, that the belt was going to switch hands at Mania. When Warrior hit Hogan, there weren’t many boos. It was exactly what the WWF had wanted. Someone else who could take the ball and run with it. At least, thatâ€™s what they had thought, though it didn’t necessarily happen that way.

The rest of the card was very suspect. There weren’t any other top matches, and probably the hottest secondary feud was Dusty Rhodes vs. Randy Savage. They faced off in an inter-gender tag team match. It was Dusty Rhodes and his valet, Sapphire vs. the Macho King Randy Savage and Queen Sherri. The match was a joke, but in an interesting twist, Elizabeth came down ringside to support Dusty and Sapphire. It was never shown that she hated Savage, only that she hated Sheri. This was important, because Savage and Elizabeth would get back together at the following Wrestlemania in one of the greatest love stories ever seen. Rhodes and Sapphire won the match thanks to Elizabeth who tripped up Sherri. Sapphire had no wrestling experience and did one suplex that only looked like a suplex because Sheri bumped big for her. And, she should’ve stayed out of spandex.

The PPV had 14 matches overall. And so many of those matches were filler. Rick Martel and Koko B. Ware opened up the show with an average match that Martel won with the Boston Crab. The Earthquake defeated Hercules by pinfall. Earthquake was being pushed harder than any big man not counting Andre, since King Kong Bundy during 1986. The Barbarian beat Tito Santana and was being pushed as the new member of the Heenan Family. The great Rick Rude was thrown into an odd match with Jimmy “Superfly” Snuka that was simply an add on match to get both guys on the show. Rude won fairly easily.

The Hart Foundation were being pushed as faces hotter than any team in the federation at this time. They weren’t in the title picture just yet, but they were being pushed that way. They beat the Bolsheviks in almost record time for a match at Mania as poor Nikoli Volkoff didn’t even enter the match. They were being groomed for the titles, but before that, Demolition had to get those belts back for themselves. Andre The Giant and Haku were the champs, but Andre’s best days were behind him. He could barely move inside the ring and didn’t even get tagged into the match. Demolition finally tied Andre into the ropes so he couldnâ€™t interfere and they pinned Haku to win the belts. This was going to set up their program with the Harts.

I used to love Brutus Beefcake back in the day because of course, he was Hulk Hogan’s best friend. He had a decent match with Mr. Perfect that I probably popped for huge in 1990. He actually beat Perfect too, which was a surprise to me at the time. Roddy Piper was supposed to be the good guy in his feud with Bad News Brown. Bad News Brown was said to be from Harlem, New York and played a very pro-Black character. Piper in an interview before the match said he had two personalities, Hot Rod, which was him, and Hot Scott, which was him painted black. He was basically painted half black over his white skinned body. It really didn’t make sense and they followed up with a bland match that ended in a double count out. I was surprised at how racist Piper came off and how easily it was passed over by Monsoon and Ventura.

There were two other semi-hot feuds with blowoff matches at this Mania. The Big Bossman turned face and fought his tag team partner Akeem â€œThe African Dreamâ€ which was the One Man Gang dressed in stereotypical African garb. The Bossman won the match without any problems and was going to be pushed huge in his now good guy role. The other match that was pushed hard on television at the time was Jake “The Snake” Roberts versus The Million Dollar Man, Ted DiBiase. DiBiase won a methodical match, but Roberts got a little bit back by hitting the DDT after the match.

And finally, the main event. It was a match that Hogan and Warrior had choreographed days before so that the match would be a success. They played up the fact that this was the first time in his successful run that Hogan’s cheers were split. They also made Hogan into a guy who was in disbelief as Warrior matched him strength for strength. It was actually a similar match that Hogan and the Rock some twelve years later. They did the old Grecco Roman knuckle lock with Warrior throwing Hogan around the ring and Jesse Ventura putting Warrior over as someone important for doing so, even though Hogan used that to get sympathy whenever he was in the ring with a bigger guy in this exact sequence of moves all the time. The kick here was that Warrior wasn’t necessarily bigger, so it was supposed to be impressive. If this were a dance, Warrior and Hogan would’ve been stepping over each other’s toes. But here, they moved slowly enough that they were able to do most of the stuff correctly. After a long match, the ending came quickly. The Warrior got Hogan up in a press slam and went for the pin, but Hogan kicked out and went into the Hogan shake. He was ready for his patented leg drop, but Warrior moved out of the way, Hogan got in position, and Warrior hit the big splash for the win. Hogan, ever being so smart, played the sympathy card huge, knowing it was sink or swim time for Warrior without him, and handed over the belt, with Monsoon and Ventura putting him over huge. Monsoon yelled the line, The Hulkster is one step closer to immortality with Ventura saying that Hulkamania would live forever.

It was a bad undercard, but this match saved it. In what was expected to be a cluster, Warrior and Hogan delivered, and the fans ate it up. It was the most perfect match the guys could have and it ended a rather average Wrestlemania and made it nearly must see.