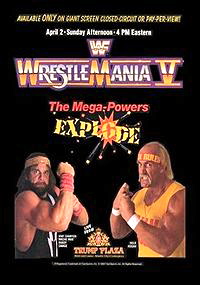 It was the night the Mega Powers were about to explode. But to the fans, that night happened at The Main Event which was broadcast on NBC. Hulk Hogan and Randy “Macho Man” Savage were wrestling the Twin Towers of the Big Bossman and Akeem (One Man Gang). Tension had already been building between Hogan and Savage on television as the storyline had been built up for over a year. Ever since Vince McMahon made the decision to put the belt on Savage as Hogan’s replacement champion, he had a blueprint on how Hogan was going to get the belt back. And it involved the lovely Elizabeth. At The Main Event, Savage was whipped towards the outside of the ring and plowed into the Elizabeth. Elizabeth was “knocked unconscious” and with Savage out of his wits from being thrown to the outside, Hogan had to save her. He picked her up and took her to the back, leaving Savage to fight on his own. After the match, Savage jumped Hogan from behind with a groggy Elizabeth pleading with the two men to get a long. Hogan couldn’t believe Savage was jealous and Savage couldn’t believe Hogan couldn’t believe Savage was jealous. The build up towards this match was excellent. It started the prior summer.

At the very first SummerSlam in 1988, the tease to the breakup first started. Hogan and Savage were in the midst of a bro-mance. They had a goofy handshake and were called the Mega Powers, which was supposedly a name to make fun of the Super Powers, who were Dusty Rhodes and Nikita Koloff. The Mega Powers were to face Andre The Giant and Ted DiBiase. Jesse “The Body” Ventura was the designated special guest referee. And Hogan promised that Elizabeth was going to wear an itsy bitsy teeny weeny bikini. Randy Savage probably put the kibosh on it and as a twelve year old boy with a mighty crush on Elizabeth, I was disappointed. Elizabeth did wear a bikini bottom at least and helped the Mega Powers win the match, and the tease started. As they won, Hogan hoisted up Elizabeth on his shoulder to celebrate, and Savage gave him one slightly disgusted look before they went off air. That’s all it took. You knew right then and there, it was going to happen. And you knew it was going to happen at Wrestlemania. So the big question was that if you already know what is going to happen, why watch it? I don’t think movie plot lines are all that hard to figure out. I don’t think sitcom plot lines are all that hard to figure out. Same here. They just lead to a logical path. And if they are done well, it doesn’t matter if you know what is going to happen.

From SummerSlam, to The Main Event, to Wrestlemania, there was a logical story thread that led to their first meeting in at least a couple years. Savage as the heel, had been a fan favorite, and he had some good matches with Ted DiBiase, but when Hogan was ready to come back from his first movie role, the belt had to come back to Hogan. The match itself was anticlimactic, but the buildup was still great. Savage was the ultimate jealous heel and he let Elizabeth know that she was his woman. Elizabeth played the damsel in despair role and she did it well. She understood her role perfectly and had great facials. And while Hogan couldn’t understand how Savage could be upset, the storyline arc was completed. You were lead to believe that whoever won would get Elizabeth. It didn’t exactly happen that way, but that’s what you were lead to believe.

The undercard here was one of the worst undercards in Wrestlemania history. One of the things that the WWF did extremely well back then was promote main events. Their number one program was always promoted with the utmost care. But, they didn’t put much effort into the rest of the card, which is what I think they do a little better now. But this was just awful. The second match from the top was Ravishing Rick Rude against the Ultimate Warrior for the Intercontinental belt. It was absolutely nothing special. At the time, Warrior was getting over big with the fans, but having Rude win was a good way to set up a return match down the line and also because the face would win the main event.

In what could’ve been a great match had they been given enough time, Mr. Perfect beat the Blue Blazer (Owen Hart) in a short match. What they were able to do was good, but it was extremely short. This was also Owen’s first Wrestlemania.

Another match that was promoted heavily was the finish to the Andre “The Giant” versus Jake “The Snake” Roberts feud. Andre was afraid of snakes, and thus afraid of Jake. Andre couldn’t do much here and with Big John Studd as the referee, the focus was more on Studd and Andre to rehash their past. The match was horrible and Roberts won by DQ. There was also a tag team handicapped match with Demolition as the babyfaces versus the Powers of Pain (Warlord and Barbarian) and their manager, Mr. Fuji. Demolition kept their straps, but fans wanted to see a regular match-up rather than have Fuji in the match. In probably the best match of the night, The Brainbusters (Tully Blanchard and Arn Anderson) in their one and only Wrestlemania defeated Strike Force as Rick Martel walked out on Tito Santana to set up their short feud. Hacksaw Jim Duggan and Bad News Brown wrestled a match only memorable because Duggan had a huge booger hanging from his nose. Honestly, that’s the only memorable part of the match.

There were two non wrestling sequences that did not help the show at all. Rowdy Roddy Piper held a Piper’s Pit with Brother Love and Morton Downey Jr. as his guests. What did this have to do with wrestling? Well, nothing. It was probably the longest non wrestling segment on a Wrestlemania show ever, or at least felt like it. And it wasn’t just long. It was boring. Piper was matching one liners with Downey as Downey kept blowing smoke in his face. Piper finally doused him with a fire extinguisher to finish the bit. The other non wrestling moment was the Wrestlemania rap with Run DMC. Jam Master Jay had his turntables in the ring as Run and the DMC spit some lazy lyrics. They weren’t mic’d all that well as you couldn’t really hear it on the broadcast. I can understand doing one long segment, but they did two on this show and it hurt the show.

The main event was a pretty decent match. Savage worked over Hogan most of the match. Jesse Ventura was selling Savage as the better man the entire match, but you knew the outcome of this match. Every great story has a logical finish. The logical finish here was Hogan getting his belt back. He kicked out of Savage’s elbow drop finisher and got his title back. At least he let Savage bust him open. As Hogan won, Elizabeth was no where to be found. I’d have guessed Savage as the real life husband wasn’t going to let Elizabeth be shown with Hogan after the match. Overall, possibly the worst Wrestlemania ever. Wait, that would be Wrestlemania IV. Yep, back to back, you had two terrible Mania shows. The next year would be better.