I don’t usually have too much to say about TNA in general because I haven’t liked the product in a while, but I think they’re definitely doing some interesting things right now. The last time I bought a TNA PPV was when Samoa Joe, Christopher Daniels, and AJ Styles were having their classic matches. But I did go out of my way to see the match when Samoa Joe beat Kurt Angle in the cage match to win the title. I know that Big D thinks that match is overrated, but I liked it. It was a little different and I thought they did a great job at making the most important parts of the match dramatic. I have some thoughts as they come up to Genesis this weekend based on last night’s Impact.

– Someone needs to give BG James acting lessons. I think that promo was necessary considering Jeff Jarrett seemingly allowed Kurt Angle to say terrible things about his wife who passed away and his children and did nothing. But yikes. That was some terrible acting. 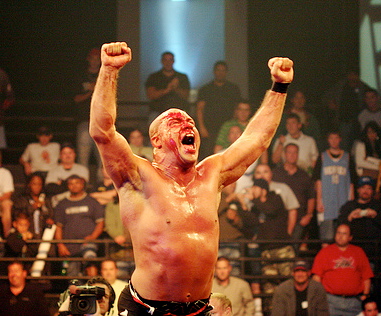 – I laughed when Kevin Nash quoted his father giving him a lesson when he was a kid and basically said that his father used to call him Big Sexy. I was waiting for Sting to laugh too, but he was fighting it well.

– Jarrett’s promo was ok, but I couldn’t wait for Foley to steal the microphone from him and he did exactly that. He just snaked it from him when he was supposed to be comforting him. I’m not sure Foley’s promo was money, but he definitely tried while putting over the TNA guys at the same time. Being in the three-way hurts his chances to cut that money promo, and I think their best chance to draw is going to be when he and Kurt go one on one. That will probably be the next show I buy and I would imagine that if Foley looks decent this weekend, it will probably be their best buy rate ever.

– I’m not so sure it’s a great idea to have the World Title match third from the top, but based on the story lines, I guess it has to be. Plus, even though I think they’ve done a really good job re-building Rhino, it’s still not a match that’s going to change the buy rate in any way.

– There were so many old WWE and WCW references on this show that I’m sure many of the fans watching Impact didn’t get them. But I did laugh when Foley mentioned Oz (Kevin Nash) vs. Bill Kazmaier as a stinker. That Alex Shelley vs. Chris Sabin match looks like it might steal the show.

You can see the full card by going to TNA’s site.

Photo by jgarber and shared via creative commons