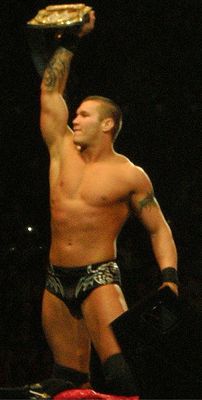 Tonight is my favorite WWE show of the year that’s not named Wrestlemania. Because they only do one of these a year and usually use creative booking, it definitely feels like a special match. Plus, my kids like picking who is going to win.

With WWE only announcing about two-thirds of the Royal Rumble entrants, it leaves the possibility of a few surprises. I’ve heard that Rob Van Dam could be one of them. There’s also word that we’ll find out the person behind all the Jeff Hardy “accidents” and the latest rumor is that it’ll be his brother Matt, instead of Christian, like we all thought. If it’s Matt, I’ll be deeply disappointed. I don’t want to see them feud at all.

Dave Meltzer just confirmed that RVD is scheduled to be in the Rumble.

We’ll be back here when the show starts, with live play by play.

They opened up the show with a recap of the great kick of death from Monday Night Raw. Give Vince credit for taking one for the team. It looked even better in slow motion and up close.

This is for the ECW title.

Pretty good opener. Swagger looked strong. Swagger worked on the left arm and shoulder for a long time before Hardy got a comeback, but it was short lived as Swagger was back on the offensive, continuing to work on the shoulder. Hardy nearly killed himself and Swagger with a moonsault. His head was very close to clipping the mat. Swagger beat him with the Dr. Bomb.

Hardy was pouting in the ring afterward.

This is for the women’s title. Rosa Mendez isn’t out with Phoenix and Santino to start.

There was a short Santino chant until he turned towards the crowd and gave them the sign to stop the chant.

Beth beat her up for most of the match using power moves, and used her own leg to hit her in the head. Melina is very flexible. Melina hit a bunch of moves on her comeback and rolled her up for the win. The ending was decent, though it was executed a little slowly.

We’re only 35 minutes in and we only have the two big title matches and the rumble match left. That’s a lot of time.

JBL told HBK that if he wins, he’ll pay Shawn all the money that he owes him tonight and Shawn won’t have to work for him again. And then he’ll let Shawn go into the Royal Rumble. Looks like JBL is winning. Undertaker showed up and said that, “Sometimes, it’s hell getting into heaven.” I’d love to see those guys go at it at Wrestlemania.

For some reason, Shawn is wearing an Under Armor camo vest. This is for Cena’s World Title.

The match was really slow, with all eyes on Michaels and what he would do. They didn’t even really do a lot of brawling. It was just a slow match. Cena had JBL in the STF and HBK grabbed the ropes, but didn’t really do anything. I think we were supposed to think that he pulled the second rope down which made Cena fall out of the ring. Cena tried to get him up for the FU, but JBL got out of it and the referee went down. Michaels came in the ring and gave JBL the sweet chin music. Cena smiled and then HBK gave one to Cena as well. He put JBL on top of Cena and then left the match and went to the back.

A ref came out from the back and Cena picked up his shoulder for a two count. JBL picked up Cena and missed the clothesline enabling Cena to hit the FU/Throwback for the pin.

Hardy came out first for some reason. Vickie came out and changed the match to a no DQ match. Chavo is out with Edge.

It’s back and forth and they’re trying to play up that Hardy is pissed off and willing to do whatever it takes to hurt Edge, but he’s still hitting his spots. It is a little more aggressive of a match than usual. Hardy speared Edge off the apron and then gave him a twist of fate on apron outside of the ropes.

Hardy was on a ladder outside of the ring and jumped off it and onto Chavo who was on the announcer’s table. But the ladder slipped out under Jeff and he nearly missed the table.

Jericho told Orton that the McMahons are vengeful people and he believes that the Royal Rumble will be the last match for Orton.

It’s 90 second increments for this one.

Rey is first in. John Morrison is second. They teased both guys going out already. Carlito makes it three. He spit the apple in Morrison’s face. MVP is in fourth. They let him clean house a bit. Khali is next. He doesn’t look happy. Carlito tried the back stabber/cracker on Khali and was unsuccessful. Kozlov is next in. My son thought it was Lance Storm. Kozlov threw out Khali, though missed on the kick that was supposed to take him out. Khali pretty much threw himself out. He also threw out MVP. And then Carlito. HHH is next. He crotch chopped Kozlov and threw him out. Randy O is next. He goes right after HHH. Rey hit the 619 on John Morrison after giving Randy O the balls drop. JTG is next after flipping a coin with Shad to see who would go in. Shad figured out after the fact that it was a worked coin. DiBiase Jr. is in next.

Jericho is next. JTG is still in by the way. Mike Knox is in next and he’s trying to throw Rey out, but he really doesn’t know why. The Miz is next. Orton hit the RKO on Morrison, Miz, and JTG. Then HHH hit Orton with the pedigree. Then he threw out Morrison and Miz at the same time. Rey was nearly out but stepped on Morrison’s and Miz’s back so this his feet didn’t touch the floor. Cody Rhodes is in next. And Legacy starts beating up on everyone. Get ready for some eliminations. The Undertaker is in. Goodbye JTG. Goldust is in. He goes after DiBiase Jr. and Cody breaks it up. Then Dustin slaps him. Then he eats a RKO. Cody throws him out. Chip Munk Punk is in. He hit HHH with the safest GTS you’ll ever see. Mark Henry is in. Shelton is in. Benjamin ran to the top rope to pull Punk and Jericho off at the same time.

Mark Henry went out, but we didn’t see how. On the reply, they showed that Rey pulled the top rope down and he went over. Kofi Kingston is next. Poor Shelton was tossed by the Undertaker after not hitting a Stinger Splash. Kane is next. Kane and Taker pick up Ted Jr. and give him the dual choke slam. Punk just pulled Regal out. R-Truth is next. What’s up! RVD is in. The Brian Kendrick is in. He helped throw out Kofi, but then HHH threw out Kendrick. Dolph Ziggler introduced himself to Kane and Kane immediately threw him out. Santino came in and was immediately clotheslined out by Kane. Faster than the Warlord. Doesn’t look like HBK is in this one. Hacksaw comes out next. Big Show must be last. He cleaned house on Taker and Kane. They’re bouncing around for him like he’s Mae Young. The Big Show is number 30.

Big Show and Kane go out it. Big Show throws out Hacksaw. Show just pressed out R-Truth. After some back and forth, Big Show punched out Punk. Some how Mysterio and Knox went out. Kane eliminated Finlay. Orton DDT’d HHH with his feet propped on the second rope. RVD hit the frog splash on Orton, but Jericho then eliminated RVD. Taker threw out Jericho. Cody and Ted eliminated Kane. Legacy is triple teaming Taker while HHH and Show are going at it. Taker choke slammed all three. Orton hit the RKO on Big Show who was on the outside and he went out. Then Show pulled out Taker. It’s Legacy against HHH. There goes Ted. There goes Cody. There goes HHH. Randy O wins.

Photo by Snerkie and shared via creative commons