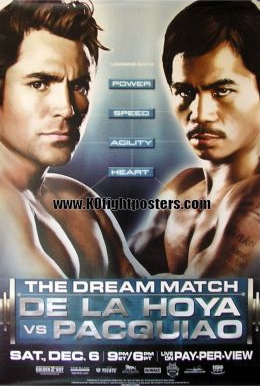 Golden Boy Promotions calls it a dream match. It’s the most popular fighter today against the number one pound for pound boxer in the game. It’s the biggest money fight that pro boxing can put forth and this Saturday, it will happen. But who will win?

Here is the panel:

George Kimball – George is the author of the fantastic book Four Kings: Leonard, Hagler, Hearns and Duran and the Last Great Era of Boxing. He also writes for ESPN.com, Boxing Digest, Irish Times, and you can find him at georgekimball.com.
Bill Dwyre – Bill is a columnist for the LA Times and he’s written some great material already about this fight. You can read more about his career here and his great columns on his LA Times page.
Tim Kawakami – Tim is a writer for the San Jose Mercury News and the author of the 1999 book on Oscar De La Hoya, Golden Boy. He writes a very popular Bay Area sports blog as well.
Scott Christ – Scott is one of the best boxing bloggers out there. He writes for Bad Left Hook.
Jake Emen – Jake is a self described boxing fanatic who writes a blog for the new website Boxing Equipment 24/7.
Jereme Warneck – Jereme writes a blog at number1contender.net, which focuses on wrestling, boxing, MMA, and video games.
Dayo Akinwande – Dayo is boxing fan and an excellent music writer who has written columns for newspapers in the Washington D.C. area. He also writes with me part time on Sonic Clash.
Duan Greally – Duan is a writer for Fight Game Blog.
Cactus Jim – Jim is a writer for Fight Game Blog.
Garrett Gonzales – That would be me, editor of Fight Game Blog.

Although the rule of thumb says the good big man should beat the good little man I’m not sure it applies when they’re meeting on a middle ground, and I think Pacquiao will have smoother ride going up than Oscar will coming down. Of course, having said that I should point out that if I’d bet against Oscar every time I picked against him I’d have been broke a long time ago.

He will just do an increasing amount of damage as the fight goes on, after losing several early rounds to Oscar’s experience and fast hands.

De La Hoya couldn’t track down Whitaker, Camacho and Mosley (who wasn’t running) back in his prime, so it’s hard to see him catching Pacman cleanly more than once or twice. Pacquiao is going to find Oscar enough to score points, flurry at the end of rounds, and win on all cards.

I think Pacquiao will fight very valiantly and may well be ahead, and I believe he can win a decision, but eventually the natural size difference is going to catch him. And Oscar has to win like this. He has to knock Pacquiao out. As he says, if he doesn’t, it’s a disaster for his credibility.

The big rumbling has obviously been the weight issue heading in this fight. Pacquiao has only fought once at above 130 lbs, while Oscar has spent a decade at 147 or higher. Pacquiao supporters point to his fight-night weights of 144 lbs, but Oscar is a guy who stood up to the best punches of Tito Trinidad and Fernando Vargas, and was only felled by a body shot by middleweight, now light heavyweight great, Bernard Hopkins. I expect the early rounds to have some mild successes for Pacquiao as Oscar adjusts to his speed and darting movement. After that, ODLH’s jab takes over as he goes on to win a clear unanimous decision. I expect he’ll land a hook that hurts Pacquiao, but Oscar doesn’t have the goods to jump on an injured fighter as he did all those years ago in the Vargas fight.

Both sides have predicted a knockout. However, I think this match will go to the judges. Pacquiao has not been knocked out in over 9 years. De La Hoya was only stopped once. That was at 160 pounds, which was far too heavy a weight for him to compete at successfully. Weight should play a big part in this match. Pacquiao is moving up from 130 pounds in March and 135 pounds in June. The pound-for-pound king debuted at 106 pounds, the lowest weight class in boxing. At some point a boxer is giving up too much size.

De La Hoya is the favorite, but he’s not young anymore, and Pacquiao is no slouch, either. It will be a real war that night, but I think De La Hoya will prevail.

I have been asked by several people over the last few days for a prediction on this fight, and each time my gut reaction has been to say Pacquiao. But The more I break down the fight, the harder it becomes to see how he is going to do be able to do it. The size and strength difference will be a huge obstacle for him to overcome, particularly against a fighter as strategically sound as Oscar De La Hoya.

I will however stick with my initial pick and say Pacquiao to take a narrow decision. I expect Manny to try set a fast pace and force Oscar to work every second they are in there. The intensity of Pacquiao’s sparring sessions suggests to me that he plans to absorb De La Hoya’s best shots early, and then outwork him later, when he starts showing signs of fatigue. In the past, Oscar has occasionally faded in the second half of the fight, and this could become more of an issue if he’s struggling to make weight. Look for Pacman to weather the storm, and then try steal it in the later rounds.

Oscar is a tough guy and always shows up to fight. Manny is a machine. He is just so fast and just keeps going and going. I think that Manny takes Oscar out in the late rounds, say 10th if I need to pick one. De La Hoya is always game, but his age is catching up and heâ€™s not quite as fast or slick as he used to be. Manny is slicker and faster than Oscar ever was. I think Manny makes him miss, peppers him with shots, and wears Oscar out. I donâ€™t think itâ€™ll be a one sided affair, but I donâ€™t think there will be any doubt who is winning the fight.

This fight is interesting for many reasons. Is the weight loss going to affect De La Hoya’s stamina? Is the size difference going to be too much for Pacquiao? Will De La Hoya’s left hook be too much for Manny? Will Manny be too slick and too busy for Oscar? I think that all of these things factor into the fight, but I still think that Oscar’s size and strength will be the difference. I’m not sure if Pacquiao has been hit with as good of a punch as Oscar’s left hook before. I do think the fight will be close though, and think because Pacquiao will be busier, he may even win the fight with one of the judges.

As for an official tally, five of us are predicting De La Hoya, while five are predicting Pacquiao. To me, that says we should get a pretty good fight this weekend.

Thanks to George, Bill, Tim, Scott, Jake, Jereme, and Dayo for answering my e-mails. I appreciate it. And Duan and Cactus Jim are top notch in my book as well.