Let me just say that the only reason I bought this show was because of Chris Jericho and Shawn Michaels. Nothing else is even half way interesting. 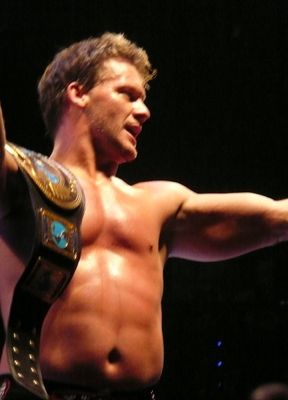 To a lesser extent, having the ability to purchase the show in HD was also a buying factor. We don’t even get Raw or Smackdown in HD out here in Gilroy, CA. Charter needs to work on their HD signal as I’m seeing a bit of pixelation.

Matt Hardy and the Miz started out the match. No pinfalls, but the Miz did hit his finisher for a two count.

Chavo came out next, hit the frog splash on Matt Hardy and is the in match champion.

Hardy hit the side effect and pinned Chavo and is the in match champion. Mark Henry is in next.

Henry hit the world’s strongest slam on Chavo and pinned him and is the new in match champion. Finlay is the last guy in.

Finlay pinned Hardy, but then Hardy pinned The Miz. Hardy is the current in match champion. The Miz has a nasty cut and is bleeding pretty badly.

Hardy played keep away for about 3 minutes, which didn’t really make sense because the rules state that you can pin anyone an win the belt. But Hardy is the new ECW Champion. Henry lost the belt without having been pinned.

Not fantastic by any means but it had a good finish. Cryme Tyme was going to set up their finisher on Rhodes and DiBiase interfered. JTG small packaged DiBiase, but Rhodes pushed them over and DiBiase got the win with the small package.

Afa Jr. came in and interfered at the end.

I can’t believe they are going so quickly to this match considering it’s been the best pushed thing the entire year. Jericho is wearing shiny wrestling tights that save “Save Me” on the butt, while Michaels is wearing jeans, cowboy boots, and a woman’s tank top.

Wow, what a battle. They played their roles perfectly. Jericho had the upper hand early on, but Michaels played the vengeful part to excellence. Michaels’ left arm was taped up and there was some sort of cushion around it. He was overcome with emotion in beating the crap out of Jericho. Cade came in and they double teamed HBK, but HBK put them both on the announcer’s table and hit the elbow for the top rope and through the table for the best spot of the night. He took off his belt and whipped Jericho like a dog and even whipped him right in the face. Jericho was bleeding from the nose. Michaels was punching from the mount when the referee called off the match because Jericho wasn’t fighting back. He then went after him one more time. Awesome stuff.

Afa Jr. is known as Manu. Randy Orton came out and lectured Manu, Cody, and Ted Jr., (the other second generation wrestlers) for what he deemed was a bad performance.

Jeff Hardy and Shelton start out the match. They were sloppy and no pinfalls happened.

The Brian Kendrick is next in. Hardy pinned Kendrick to be the in match WWE champion.

Kendrick hit The Kendrick to pin Jeff Hardy and won the in match championship. MVP is next in. Kendrick is still the champion and he’s made this match pretty good. HHH is now in.

Within 45 seconds, he pedigreed Kendrick and is now the champ. Well, Kendrick looked great, at least until HHH treated him like a jobber. Around three minutes left.

Hardy hit the twist of fate on MVP to win the pinfall. He’s the current champ.

HHH pedigreed MVP with 5 seconds left and pinned him to retain his title.

At least it ended. They tried to have McCool sell a knee injury but she was terrible at it. Maryse used a long submission hold. The match was way too long and McCool used about 5 big boots to the face. She used a face buster to win the match. And again, it thankfully ended.

The Undertaker came out to put Vickie Guerrero in the casket, but the Big Show was there. Vickie was screaming at him for complaining for not being in the scramble match, and then he jumped the Undertaker.

Mike Adamle told King William Regal to be ready to substitute for Punk in case he can’t be in the match.

Batista and JBL start it off. Batista used a figure four, but it was a fairly boring 5 minutes.

Kane is next in. Kane choke slammed JBL to become the in match champion.

Rey Mysterio is in next and he’s wearing a mask with a mohawk.

Punk doesn’t come out. It’s a busted up Jericho who is the last man.

Batista pinned Kane with a spinebuster with 30 seconds left. Jericho stole the pin on Kane when Batista was occupied with Rey Rey. Jericho is the new World Champion.